There are some things in life that cannot be burned, and these are the things you must drown.

Mara considered this as she walked over the coarse, dampening sand, feeling an increasingly agitated sea curl around her ankles as the sky grew overcast. She had burned all there was to burn: photographs, ticket stubs, notes written on Post-Its and gum wrappers.

Now the only thing that couldn’t be burned was lying cold in her hand, its edges biting into the skin of her palm.

She wondered if she had done the right thing coming here; she could only throw so far, and if it didn’t go deep enough it might be washed ashore again. Perhaps the lake would have been a better choice – she might have swum to the deepest part and let it sink to the bottom where the still waters would never move it.

But she was here, and she wanted it gone now, so it couldn’t be helped. The sky rumbled above her. The sea boiled up around her legs, soaking the cuffs of her jeans. A drop of rain fell against her face, and she let it stay there until it dried.

Mara didn’t know what she was waiting for. One patch of sand was as good as another, and it would be best to go before the storm broke.

She walked along, head down, deep in thoughts that swirled and ebbed like the water sloshing around her. She didn’t notice the thing until she almost stepped on it. When Mara saw where she had been about to place her foot, she shrieked and stumbled back, falling onto the sand.

There was a creature entangled in a tarred fishing net. It was about the size of a human child, its skin a mottled greenish gray. Its features were a blend of humanoid and something vaguely other, wide and flat and scaly. It had a face and a torso and arms, with webbing between its bony fingers and slits in the sides of its neck, which were too perfect and symmetrical to be injuries. The lower half of its body was a long, muscular tail, covered with tiny iridescent scales and ending in a fin that had probably once fanned out magnificently but was now limp and tattered. Long, slimy green filaments protruded like hair from its scalp.

Mara stared at it, so shocked that she could feel her heartbeat pound in her stomach and her throat. The creature’s eyes were closed, and she would have thought it was dead except for the faint, labored gurgling emitting from the slits in its neck. Almost its entire body was entangled in the net, and Mara could see where the tarred rope had cut into skin. The neck, arms, and torso were covered in lacerations oozing thick, dark blood.

She didn’t know what compelled her. Later she realized she should have backed away to observe it from a safer distance, or at the very least rubbed her eyes to make sure she wasn’t experiencing a hallucination brought on by the new pills her psychiatrist had prescribed. But she began pulling at the net with her hands.

She never stopped to wonder at the strangeness of the circumstance – her mind had become clear and singularly focused on the task at hand. She tried to avoid touching the creature, but every so often its skin brushed against her own, damp and smooth and cool, reminiscent of the sting rays she had stroked at an aquarium as a little girl. The skin had a variety of other damage in addition to those caused by the net – bits of stone and wood were embedded in it, along with a few small, serrated teeth.

Her own skin was collecting injuries of its own: the net burned and cut at her fingers, her palms, her wrists. The sky grew darker, and the sea grew angrier, until at last the clouds broke open and rain started pouring down. Mara pulled the last of the net away just as a wave crashed over her arms and the creature’s body. She stood up quickly, her trance broken.

For a moment she stood there and stared, getting soaked as the sea roared closer.

A glitter in the sand caught her eye – it was the necklace he had given her for their anniversary, the present she had resolved to cast away. The green stone on a gold chain had fallen from her hand when she began tearing at the net. She picked it up.

She let it fall from her grasp onto the creature’s chest, turned, and ran away into the rain. She looked back only once, and when she did, both the creature and the necklace were gone, washed away into the sea as if they had never been there at all. 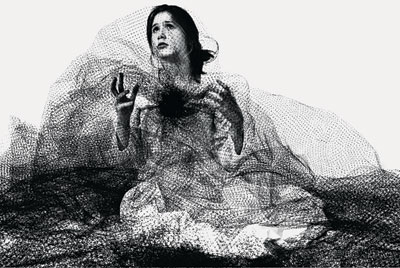 Favorite Quote:
Courage is the price that life exacts for granting peace. The soul that knows it not knows no release. From little things. Knows not the livid loneliness of fear, nor mountain heights where bitter joy can hear... the sound of wings. - Amelia Earhart