Favorite Quote:
To die may be an awfully big adventure, but to love is an even grander affair -myself


Chains rattled around me, pulling at my legs and neck. A fury settled so deep in my chest I thought it would rip me apart from the inside out. Black, hot blood oozed down my limbs and pooled beneath me on the cracked concrete. Metal hinges squealed open and my head snapped around to snarl at the intruder. A tiny boy came into the room carrying a tray laden with food. He appeared only moderately afraid of me and came close enough to sit by my black paw. His voice was like that of a girl’s but he continued to chatter as he held food out to me in his minute hand.

When the food was gone, he stood and walked closer to me. He stroked my paw like it was that of a cat instead a giant, scaled, clawed monstrosity. As this happened, the door opened again proceeded by furious voices and the cocking of guns. Red rage blinded me, followed immediately by black.

I bolted upright in my bed. Had what I just seen been a side effect of that scary movie I just watched or was it…? I shook my head to shake off my thoughts. They couldn’t be coming back. It had been almost three months since the last one. I fell back against my pillows and stared at the dark ceiling for a while. After fifteen minutes of being unable to fall back asleep, I rolled onto my side and switched on the light. ‘Nightmares like these were just causes of bad thoughts or stress or something right? Maybe I just need to talk to someone.’ My feet touched the cold wood floor. My door swung open silently and I stepped out into the hall, listening for any noises from Mum and Pop’s room. I shut the door behind me and tiptoed to the door at the end of the hall.

I raised my fist to knock when it opened to reveal my disheveled brother. He looked freshly roused from a deep sleep. His copper hair was mused the way only a pillow can manage and his eyes narrowed at me. I smiled sheepishly at him and he stepped aside to let me in. “Another dream, Lasair?”

“Yeah... I thought they were done but they aren’t,” I sat on the window sill and frowned at him. “It was almost like I was there. I’ve never felt that kind of anger before.”

Luke sat across from me on the foot of his bed and rubbed the back of his neck thoughtfully. “Don’t tell Mum or Pops about this. They’ll just send you away again. Maybe you oughta find someone to help you figure out what these dreams mean?”
My frown deepened into a scowl at the sarcastic undertones in his voice, “I have a feeling that whatever is happening it’s not too far away.”

Luke shrugged and lay back on his bed. “I don’t know what to tell you, Lasair. I mean you’re only sixteen. You can’t just go off on your own to search for something that might not even be real. Like, seriously? A dragon? Or whatever you think it is,” he rolled his eyes at me and laughed.

With a sigh, I stood. “Well glad to know you believe me too,” I snapped and opened the door to find our eldest brother Seth leaning against the jamb. “What? Now you’re eavesdropping? Think I’m crazy too?” I pushed past him and hurried down the hall to my room.

A soft knock on my door a few minutes later startled me out of my angry daze. I opened the door, saw Seth standing there and slammed the door in his face… Almost. He caught the door and pushed it open. “May I come in? I need to talk to you.”
Angrily, I stepped back so he could come in and went to sit on my bed. Seth sat next to me and took my hand in his, the way he used to when we were a lot younger. “I don’t think you’re crazy. There’s something that our parents have never told you that I think is time for you to know.” He pushed his sandy blonde hair back from his forehead and looked at me with sad grey eyes, “I’m telling you this now because they never will. Lasair, you’re special. And I don’t mean in the family-to-family kind of way. I mean that when your birth was extraordinary and your true nature been suppressed for the past sixteen years. Our parents were afraid to admit that what you are is a blessing. I’m taking you somewhere tomorrow that will explain it all, okay?”

I nodded, feeling confused and hurt. Seth kissed my forehead, tugged my fiery hair and bid me good night, tossing over his shoulder I should get back to sleep cuz we had an early start. I groaned as I fell back against the mattress and looked at my alarm clock. Silent red numbers declared it 2:37 AM. “”Happy birthday, Lasair…” I mumbled, switching the light off.
? 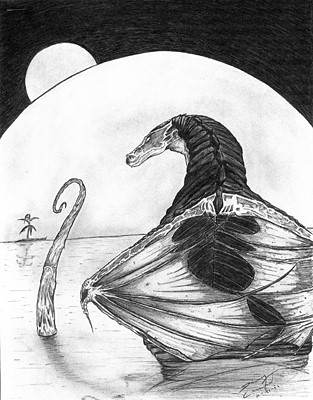 This is an idea for a prologue I have for a book I want to write and would love some feedback. It's about a young girl who rescues a dragon from the cluches of a curse.

Favorite Quote:
To die may be an awfully big adventure, but to love is an even grander affair -myself

View profile
Thank you for your feedback. This is an alternative opening for the book that ended up taking a completely different route than it's prior version. Seth is her brother and his character will be elaborated upon in a few chapters. At this point with Lasair's history of being told her dreams and visions are a figment of her imagination and that she's crazy, she's willing to believe anything at this point, which I wasn't sure if I had conveyed that sense enough. This was really helpful feedback. Thank you again
F. said...
on Apr. 11 2015 at 3:00 pm
Well I am intrigued. I like your nice mix of modern day and whatever fantasy world you have. Just Seth, I don't understand exactly who he is, and its all sudden this dude pops up and is like "you're special." And I don't really understand why someone would pop in and say that, and have the narrator believe him...If that makes sense... But great job!