She breathes in my ear, like she’s telling me a secret. “I think someone’s trying to Poison me.”

She says the word Poison with a capital P. I look around to see if anyone is listening. They aren’t. “Whaddya mean?”

Her breath tickles my ear again, this time with a sense of urgency. Each breath is a word. “Someone. Is. Trying. To. Kill. Me. With. Poison. In. The. Water. Fountain.”

Each word is a breath. She’s using as many breaths as possible before the Grim Reaper appears next to her.

I take off my hood and look at her, screwing my face like a crumpled-up piece of paper. “Why would someone want to kill you? With poison?”

“I don’t know.” Her fingers untwine themselves from around the Poland Spring bottle, which she presses into her chest. The faded label of the bottle peels like tree bark. She unscrews it, and I watch her throat swell. “It’s water, I promise.” Her laughter tinkles like a thousand tiny bells, but the moment she closes the bottle, the orchestra ceases abruptly.

A muffled chortle erupts from my throat, but it’s short, faint, and a little too late. I play it off as an awkward cough. “Let me get this straight. You think someone poisoned the water fountain because they want to kill you.” I smile.

The edges of her eyes moisten, and she nods like a bobblehead.  “That’s why I brought my own. They’ll stop at nothing.” Her hands cocoon the water bottle again. We’re acquaintances at best, but I can still tell she thinks I think she’s crazy. She’s not wrong.

“Who’s ‘they’?” I make air quotes with my fingers.

“They could be anywhere.” Her head darts to see if anyone is listening. They aren’t.

“And ‘they’ are actively trying to kill you.” I don’t think she realizes I’m making fun of her, because she looks at me with innocent eyes, like a baffled farm animal.

“I know how these things work,” she insists. The Poland Spring bottle disappears under her white knuckles.

“Do you?” I ask, but it’s a rhetorical question.

“No, you don’t.” And at that moment, I stab the knife into her neck, a few inches above where she holds the bottle. I can’t believe she thought I’d use poison. 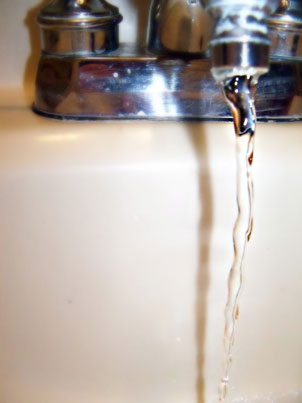 Favorite Quote:
In the book of life, the answers are not in the back