The bleak morning light shone dimly through the warehouse. The place had been abandoned for years. A large broom company had owned the establishment prior until five employees were found dead in a secluded corner of the depository. Each victim had been stabbed several times and were all bound tightly together with chains. The suspect was deemed Jack the Clipper due to a pair of bloody clippers found next to the bodies. After a solid year of investigating the case though, authorities were flummoxed. How could the killer be this fastidious? The FBI had nowhere to turn, nowhere to go. There were no clues to follow and no suspects to question. After months of searching for the perfect tip, the case was publicly closed. News outlets criticized the FBI, saying that their efforts were perfunctory. The president was under a modern catch-22. No matter which side he stood on, he would get scathed by the public. The United States was in a fiasco. Eventually, the hype died down, but not after thousands of theories and Youtube videos. Each video or article had its idea on the killer’s identity. None proved any success to the government. In the end, compensation was given to each of the victims’ families as a final word of remorse. However, the payments did not console the families. America’s most wanted serial killer was out there, still alive.

Twenty years later, the warehouse was still empty inside. Vegetation was ubiquitous in the building, and only the occasional shriek of a bird pierced the silence. Over the past six months, five unarmed troopers had disappeared guarding the warehouse. Investigations were minimal. A loaded police officer now stood guard at the front, as the area was still considered a “crime zone”. The officer was about to end his shift when in the distance, an old man limped toward him. The cop was stunned. No civilian had come near the vicinity of the depository for over a decade. As the elderly man came into the clear, the officer could see blood dripping down his leg. He had scars all over his face and looked as if he had brazenly fought a lion. The officer immediately went over to help tend his wounds.

“Are you alright sir?” the police officer asked with genuine care.

“You think I am? I’ve nearly been killed by Jack the Clipper!” the civilian said with a slight hint of sarcasm. The harsh tone made the officer wince.

“No!” the elderly man said with such force that the officer jumped straight up. “I want you to catch him.”

“ Sir… your leg…” the officer began to say, but abruptly stopped himself. He didn’t like the expression the man was giving him. “Can you tell me where he went sir?” the officer hesitantly asked.

“He went that-a-way.” He pointed over to a clump of trees, leading to the back of the warehouse. Without a moment’s hesitation, the officer sprints to the area, hoping to find the mass murderer. As he runs through the trees, he sees no one but himself. After an hour of searching for the criminal, the officer heads back toward the warehouse. As he steps into the open, gunshots ring out from all directions. Beads of sweat form on the officer’s forehead as he takes cover behind a dumpster. Bullets spit through the air, bouncing off the tattered walls of the warehouse. Gun drawn, he locks onto his radio dispatcher.

“Violent criminal on the loose… at the abandoned warehouse. He’s got a gun… I need backup,” he stammers as bullets pierce through the dumpster. “I can’t stay here… I’m gonna run for it.” After a slight pause, the officer makes a mad dash for the warehouse wall. The cracks of gunfire and the feeling of searing pain show that he has been hit. The cop barely makes it to the wall before collapsing to the ground. The pain sends stars into his eyes, yet his adrenaline is coursing through his veins. After some time, cops swarm the area but are pushed back under heavy fire. The area is imbued with the ra-tat-tat sounds of projectiles flying through the sky. After a final gunshot, there is an unearthly silence. It takes fifteen minutes before all police units come out of their hiding places. After treating the wounded, there is an immediate search for the madman. State troopers along with local police stations scour the area, looking for clues. As a small party of police agents steps into the warehouse, there is a reeking smell of flesh. As they trek towards the scent, they realize the ground has been coated with fresh blood. When the crew reaches the corner of the warehouse, a gory sight meets their eyes.

“These are… the officers who went missing,” an investigator sputters. The five police officers were found hacked to death, with a pair of bloody clippers next to the bodies. There was no doubt that Jack the Clipper was alive. As the group prepares to leave the scene, the examiner sees a flash of white. “Wait… there’s a note,” the detective says cautiously. He takes out a pair of gloves and flips the blood-stained note. Just seconds later, the color is all gone from the investigator’s face. Wordlessly, he shows the note’s contents to the others. Inside, there is only one sentence. 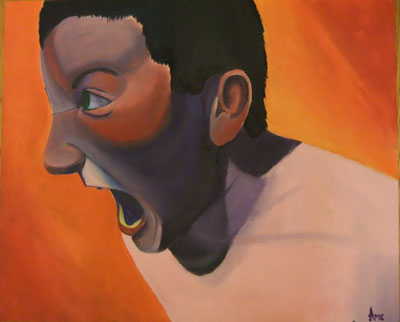 Kinda gory and was written for a school essay prompt. Mostly a poetry guy, but it's good to test out new things. Hope you all enjoy it!