Jonah In The Storm | Teen Ink

Jonah In The Storm

It was a dark night. The moon hid behind a herd of murky clouds. The stars were tiny freckles splashed across the canvass of sky, twinkling with their weak lights. The harsh breeze was cold and unforgiving, battering against Jonah’s face as he stood still on the dock. The water beneath him was turbulent? already he could see the fury lurking in it, biding its time to lash out once the storm came.

He wished fervently so that the storm comes sooner. He wanted its violence, to feed on it. He wanted something that could par with his own turmoil. He needed something he could understand. The storm was his friend, because it was a brother to his heart. So he waited, not wincing when the harsh wind almost threw him back. The clouds huddled together so that the sky was a heavy bulge of darkness. The shadows were violated when lightning tore the sky and kissed the horizon, followed by a thunder that roared in its own wrath. Birds raced south, frantic with their wings as they sought for safety. Trees swung east and bent almost abnormally as the cold wind slapped on them. The boats that were tightly tied on the dock were stolen by the strong current, helpless in the lake as the stormy water strangled them. He watched the boats flail hopelessly in the water, and felt a small tug of regret as they veered toward the forest where he could not see them.

He wore a faded shirt and washed out denim, matched with a pair of sneakers well-worn throughout its years. The ponytail that kept his untamed hair low on his back was snagged by the wind, freeing a mane of hair that was dark against the flash of lightning. From faraway, Jonah made a picture? that of a man of no more than thirty, with his hands shoved neatly in his pocket, waiting for the rage of the storm. He stood with an easy stance that spoke of inner confidence, and a grace that came naturally through birth. Anyone who might have seen him wouldn’t think of the tension that crept heavily on the base of his neck, and the gut-wrenching turmoil that churned in his stomach. To anyone he would have been simply a man waiting to witness the power of storm. They wouldn’t know of the dull pain that sang darkly in his heart, or the horrible flashbacks that made him sweat cold. To anyone he would’ve been a simple man awaiting the beauty of what would come.

But he was not a simple man.

He smiled reluctantly as he told himself that. Then he looked up to the sky, knowing that the storm was closing the distance, traveling violently through the waters that would eventually lead to him.

The lightning became more frequent, the wind cruel as it pushed down the trees. The thunders growled in the midst of chaos, snarling to the skies as they echoed the great distance. In the center of tumult, Jonah stood silently, his face pale and cold, his hands balled into fists beside him.

When the storm came, he was more than ready. He stared at it with challenge in his eyes. Come, they seemed to say, come and see if you can take me. If there was fear in him, he banked it down. He despised nothing more than fear.

Yet he was forced to brace himself as the swirling wind threw him back, as it sent him flying into the lake. The water was cold and heavy, swallowing him whole as the current pulled him north. He rammed against a wooden plank, howled in pain as its stray nail dug deep into his right shoulder. Then the water was dragging him in a frenzy of force. He fought it off, tried to swim despite the cramps that constricted his muscles. But the lake refused to let him go? instead it brought him toward a dark spot in the forest, where the beaten trees floated dangerously on water. He reached for one, but missed by an inch as his back hit a sharp rock. His blood was a hot gush that warmed the surrounding water. He fought back the urge to close his eyes? he knew that if he did so, he would die. So he forced his eyes to remain open, refusing fear when it seemed to creep on him.

Everything happened so fast.

A thick trunk of a tree raced toward him. He tried to clear away its path. The current was strong, and his helpless flailing was a wasted effort. Panic clamped down his throat as the tree yanked toward him. He didn’t even have the time to recognize fear when its thick body collided with his own, as his head rammed hard against its rough surface. Then the tree was in front of him, racing to collide with another trunk. His vision blurred, his arms going numb. The current carried him like a crude warrior, never letting him go. He felt his eyes closing and fought to keep them open. But it was so nice to just slowly slip, to just give up.

Death was lulling him, tempting him to surrender. When he realized that the last ounce of his strength deserted him, he was forced to accept his fate.

So this is it, he laughed to himself, a bit hysterically. Just like that, in the hands of a stupid storm.

Then the shutters of his eyes closed down, so slowly. The last thing he saw was the moon, peaking its way out the covers of clouds. The rain was stabbing knives on his face as he floated with the current. He didn’t even feel the pain, not really, because everything about him was numb.

He let his soul gradually slip out. He shouldn’t feel anything, he told himself, but the grief that clutched on his heart was real. With a sigh, he forced himself to take that in without regret. Before him he saw the face of his lover, smiling with a secret, looking at him with eyes full of knowledge. Weakly, he lifted his hand to touch it, but it faded into shadows before he could do so.

Then, with his hands falling back into the water, Jonah was gone. 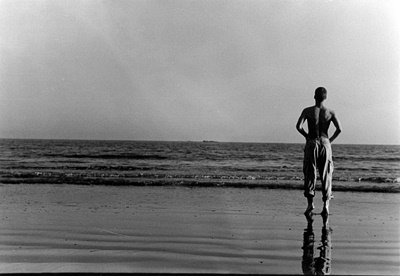 The author's comments:
hahaha what a dumb title. but this is an excerpt of a novel i'm working on. hope you enjoy it!
Post a comment
Submit your own