The Woman With Trembling Lips

A wolf’s howl echoed through the lands, traveling the forest as the owl, hidden in the shadows, performed a graceful sweep of a fly and snatched its prey. A snake slithered its way through the bushes, hissing silently as it slid up a tree. The rainforest canopy, resting quietly on a leafless branch, was unaware.

Drab clouds huddled together, so that the sky was a heavy bulge of darkness that sunk lower and lower, until it burst into needles of rain. Lightning tore the sky and stabbed the horizon, followed by a thunder that growled in its own fury. The stars that once freckled the sky hid behind the darkness, clustered around the glum moon. For a moment there was only silence-- a long, heavy silence that seemed to have shrunk the lands and made terror buzz inside the woman’s ears.

She crawled, bruised and bloodied, her clothes torn from violence, upon the rough trail that led to the stormy river. Her scraped knees were failing to do their job, but fear alone made them move. Her hair, once lush and auburn, was covered in mud as it rushed with the wind, as she pushed them away so that her eyes could see ahead. A sob caught on her throat, seemed to scrape the tender flesh, and made her crumple on the ground. Then, pushing herself up, willed herself to put knee in front of knee. I have to get away, was all the woman could think.

The fear that lodged in her throat as a rabbit dashed sideward leapt into her eyes, so that for a moment her world froze, and only terror alone traced a finger on her face. Licking her lips, she shook her head and hurried. There was a boat tied on the dock by the river, she knew, because she’d seen it as he dragged her toward the cabin. She only had to jump on it, sail away, and then she would be free. She would hop in the earliest plane and move out of state, probably go to New York, where she could blend among the crowd. He would not find her there, she convinced herself, where she could hide behind millions of people. The thought of it, the hope, gave her a temporary joy that had her adrenaline pumping. Her heart beating loud, her body trembling, the woman ignored the pain as she pushed herself forward toward the river.

A mist. The ghosts. An owl’s hoot. She fought her way as pain made her vision blur. She tripped when a gleaming rock caught her foot, and stumbled face down on a pool of mud. She could taste it now, the bitter lick of terror, as she stopped herself from fainting. The harsh rain shot down to her like stabbing swords, like sharp, cold knives that punished her back with their blades. Weeping now, she clenched her fist and crawled on mud. The dock was near. Already she could see the tail of the river, its violent waters that strangled the battered trees.

Whispering a prayer, she tried to stand up, buckled, and was forced to continue crawling. The pain doesn’t matter, she told herself repeatedly, soon it will be gone. A tree fell down before her, smashed to the ground and made her scream. The violence of it, the death it could’ve brought to her, stunned her so that her eyes went wide with shock and her lip trembled. Slapping a hand on her face, and wincing after, she struggled forward.

The dock was wet and half-destroyed. What remained was a feeble woodwork that could easily be snagged by the current. The boat was tied to the front of the dock. Blowing a breath, she skirted the splinters of wood, tiptoed around the rusty nails that stuck out, and slumped against wood as her knee buckled. With slow hands, she pushed herself toward the raging boat, and fell painfully on it. She only had to untie the rope to be free.

A cold hand gripped her shoulders and hauled her back to the dock. A gasp. A scream. Her eyes went dark with fear as the back of his hand connected with her cheek and made her lips raw from the assault.

Everything happened so fast. Later she would think herself an animal, a fierce animal fighting to survive.

She saw a sharp plank of wood. She didn’t have to think. Her hand snaked toward it, and without wincing from pain, struggled free from the man’s grip. A scream raked on her throat as he grabbed her by hair and thrashed her around. At the sight of her yanked hair on the ground, her eyes filled with rage.

Her lips thin, her eyes lit with flame, she brought the pointed end of the plank to his chest. For a moment everything seemed to freeze. The man stood, unmoving, as he stared down to her. She was incredibly afraid that she hadn’t managed to kill him, that her stab was too weak, and that soon he would get revenge by taking her life. Slowly, she stepped back, like a rabbit backing out. Eyes wary, she blinked in shock when blood bloomed to where the wood had penetrated.

“You’ll pay.” His voice was cold, though his eyes were beginning to glaze. “Never forget that. You’re still mine, Sarah. Nothing would change that.”

Then he dropped like a fish to the river, stolen by the violent waters and forever gone. The wood soaked the blood he had left. The wind was harsh. And the woman was alone and afraid.

With a shaky breath, she fell to her knees and rocked back and forth. She wept, though she didn’t know it. And when hours had gone, and the storm was over, the half-destroyed dock became the food of the river.

Together with the woods, Sarah went underneath the water, and smiled when the last of her breath bubbled toward the surface. 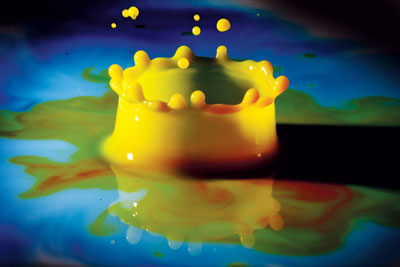 Favorite Quote:
Don't be a victim; be a titan.

That was REALLY good. Seriously. The details are amazing, and the ending was unexpected.

View profile
amazing! So much detail and I never expected that ending. I also love when you said 'You'll always be mine sarah." It makes me wonder how the 2 characters were connected.