Amanda Lawson lay fast asleep in her comfortable Sleep Number bed on the morning of her twenty first birthday. She had spent almost the entire previous night drinking and partying, before crawling back to the expensive house given to her by her wealthy parents.

She took a deep satisfied breath as she rolled over in her perfect, white sheets, the warm sun shining brightly on her pretty face. She was enjoying a very peaceful, much-appreciated sleep, when a loud banging erupted below her loft bedroom. The thumping noises frightened her awake, her heart beating unnaturally fast.

She sat up, frozen, listening as unfamiliar footsteps began pounding up the spiral staircase at a painfully slow pace. Amanda pulled the blankets tighter around her shoulders, fumbling for the pocket knife she left on her nightstand. As the dragging footsteps grew louder, she gripped her knife tightly. Her wild and illogical imagination jumping to ridiculous conclusions as to who or what was climbing up to her room.

“W... who’s there?” Amanda finally choked out. All she received in response was a bone chilling grunt. Tremors ripped through her entire body as the first thing appeared in her dimly lit loft. Zombies. Her mouth opened and a deafening howl was released as a warm liquid spilled onto her sheets, dripping down her leg.

Two more zombies appeared behind the first and they all moved slowly toward her, grunting and moaning terribly as they approached. They had almost reached the bed when Amanda’s crippling fear morphed into an uncontrollable rage, her need to survive greater than her lifelong phobia of zombies.

The girl rose to her unsteady feet and produced the knife she always carried. She leaped at the first zombie, despite the distinctive shriek of protest that her mind had trouble processing. She stabbed the first zombie in the stomach and throat just before the other two grabbed her from behind.

The woman’s mind was so overcome with fear that she didn’t register the shouting and crying around her. All Amanda knew for sure from all of the scary zombie movies she had been forced to watch as a kid, was that the only way to kill them was to destroy their brain. She struggled out of their grasp, kicking and flailing about, slashing her knife this way and that, until all of the zombies were no longer moving.

Covered in blood and still shaking, she tiredly stumbled down the stairs, traumatized to the point of insanity by what she found waiting for her at the bottom. A birthday cake was set neatly on the counter, and a huge banner was taped to the wall behind it.

On the banner were the words: Just kidding! There’s no such thing as zombies! HAPPY 21st BIRTHDAY AMANDA! Love, Mom, Dad, and your little bro, Matt.

Amanda’s eyes widened and she lurched back up the stairs. “It was only make-up,” she mumbled, her eyes staring blankly at the bloodied corpses.

Nurse Pratchett gently shook the screaming old woman awake, but the lady didn’t stop shrieking. Her blank, gray eyes darted around the room, unseeing as she struggled and writhed inside her straight jacket.

“It was only make-up!” the old lady screeched.

“I know, Mandy, I know,” Nurse Pratchett replied calmly, before injecting Mental Mandy the Zombie Slayer with her daily dose of “meds.” 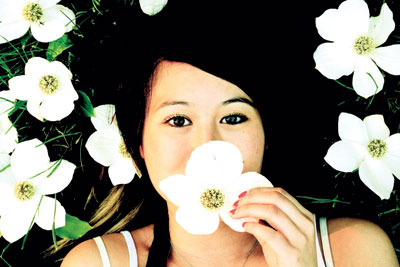 View profile
A-mazing! How the hell has no one else commented on this! I just stumbled upon this today and I'm soooo glad I did! This was a simple poem, but amazing none-the-less. well done :) I'm favouriting this.