I do not work for an organization, I do not have any kind of degree - I have not even finished high school yet. All that qualifies me to write this article is the fact that I care deeply about marine life.

When my family vacationed in California, we visited an aquarium and I could not have been more excited. We spent a lot of time at an exhibit that shed light on some of the problems in our oceans.

I had trouble picturing what 100 million looks like, but I want you to try. It’s one-third of the U.S. population. A hundred million miles is roughly the distance from the earth to the sun. It’s also the number of sharks caught and killed every year. Half die accidentally as by-catch. If you do not connect specifically to sharks, just realize that dolphins, seals, sea turtles, and whales are also caught in fishing gear.

But the by-catch is not the only problem. I was shocked to discover that we are fishing the last 10 percent of some populations, including the Atlantic Cod. These over-fished species could soon disappear. My family does not eat fish often, but many people would have a hard time imagining lunch without their tuna fish sandwich.

In addition to by-catch and over fishing, there is a third problem: habitat damage. Trawl nets used for fishing can be miles long and sweep up everything in their path. Picture a bulldozer over a mile long dragging through your neighborhood. Parts of the North Sea near Denmark are trawled up to 400 times a year!

After walking through the exhibit, I was beginning to feel that I would never be able to eat fish again when I saw a sign that read “You can help” next to a pile of Seafood Watch guides. In it was a best choices list, a good alternatives list, and an avoid list. I was pleasantly surprised (as were my brothers, who eat lots of tuna) to see that only blue fin tuna was on the avoid list. Yellow fin, albacore, and several other kinds are fine. I no longer felt helpless because here was a whole list of guilt-free fish options!

Ever since I learned of the problem, I have been going around to schools, writing to restaurants, and doing whatever I can to educate the public about this situation that has a relatively simple solution. For more information on how you can help, or to download a Seafood Watch Guide, go to www.Seafoodwatch.org. 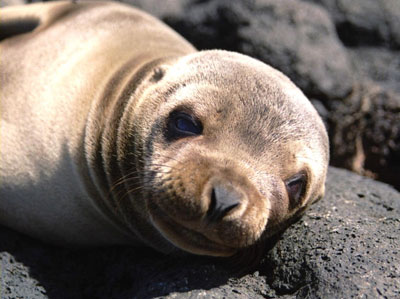 Favorite Quote:
"I like nice people who do nice things." -A Friend