Throughout our lives, many amazing and extraordinary things happen that we cannot explain. My life has been filled with so many adventures that I cannot begin to think what life would be like without a little excitement or strangeness. I've lived in six cities and towns and experienced things many never will.

When I turned six, we moved to Upper Michigan. We were in search of an apartment but ended up in a campground on the shore of Lake Superior. That summer will always be the most exciting of my life. Many things happened, many people walked into my life, and memories of brilliant sunsets, water and sea gulls were carved into my mind forever. Things that may seem small meant so much to me. I took every detail into my memory, never to be forgotten.

One day, my dad, sister and I decided to take a walk on the shore as we usually did, searching for agates or misshapen driftwood. The sun was directly above us without a cloud in the sky. The best thing about Lake Superior was it didn't have a fishy smell like some lakes. Instead there was a fresh smell like the cold of a freezer.

We wiggled our toes in the water and made footprints in the sand, watching them disappear as the waves washed them away. The air was a little nippy when we got wet and the wind would make us shiver.

That's when my dad spotted a soaked dragonfly lying on a rock. It looked almost dead, with its limp wings. Since the sun was shining, we decided to dry it off, so Dad set the poor dragonfly on my shoulder. We walked and talked for an hour and I forgot about it until I felt movement on my shoulder, like something gently digging around in my skin. Then the dragon-fly took flight, circling once or twice, and was off.

"Well, you saved him," my dad sighed, as he watched the sky. I realized he was referring to the dragonfly as a "him" and, to me, it seemed the right way to address the insect.

That evening, as the sun was turning the sky extravagant pinks, purples and blues, I walked back from the shower houses, my towel under my arm and my flip-flops scraping the ground as I dragged my feet. I looked at the sky and what I experienced next, I'm sure no one would believe. They'd hop around in circles pointing fingers and screaming "Liar!" but I wasn't sleepwalking. I wasn't daydreaming. It really happened.

I saw the dragonfly zipping around, quickly flapping its wings. Everything happened in a blur. The dragonfly flew in front of me and landed on the tip of my nose. I felt an extremely soft pinch and then it flew off.

I stood there, shocked at what had happened. I didn't know if I could even believe it. It took me a minute to recuperate as my eyes almost bulged out of my head. And then I began to laugh. I laughed so hard that tears rolled down my cheeks. I don't know if anyone near me saw what happened. I know what I saw and what I felt and no one can ever tell me differently. A dragonfly kissed me. It must have been the one whose life I saved. It had to have been. I felt so light-headed and grateful and mystified. I connected with a dragonfly! I discovered that no matter how small or seemingly unimportant someone is, helping them can mean the biggest rewards. Not money, but mentally, it can make your heart swell to the size of Mount Rushmore. Now every time I see a dragonfly, I think of the day I saved that one on the beach. 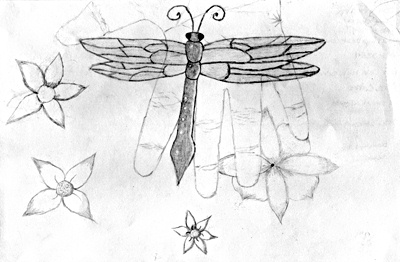