Favorite Quote:
"I have too many fantasies to be a housewife. I guess I am a fantasy."

There’s an unspeakable act of animal cruelty happening under the noses of Americans, and some may be participating without even knowing it.

Have you ever heard of the drug called Premarin ®? Over nine million women in America and Canada take this drug, which is used to help restore and level out estrogen levels, which is the female hormone, in women going through menopause. But a sickeningly few number of these women know what really goes on to make Premarin ®. Even a startling amount of doctors who prescribe it don’t know.


I’ll start out by telling you what Premarin ® is. The drug is made from isolated mare’s urine. (PREgnant MARe urINe) Because the urine is collected from pregnant mares, a mare is a female horse by the way, it’s rich in female hormones. But while it might sound funny to some people…(haha…these women are taking horse pee!) …It’s actually not funny at all.


Besides sounding fairly gross, there is a deeper concern revolving around Premarin ®. It’s a horrible animal cruelty process that still remains perfectly legal.


The mares used in this process are treated under horrible conditions. The people who make Premarin ® need the urine to be as strong as possible, so the poor horses are given only the amount of water they need to live, so that the urine is very concentrated. Every single Premarin ® mare is dangerously dehydrated.


To collect the urine, there is a cup-like contraption underneath the horse. Premarin ® doesn’t want any of the precious urine to go to waste, so the mares are put into teensy tiny box stalls, where there is no room to lay down, groom themselves, scratch itches, or even turn around. This way, the cup isn’t moved and the company is able to collect as much urine as possible. The cup contraption that is used can cause serious chafing on the mare, along with serious infections.


These mares stay in this same exact position for six months, barely able to step to the side. The stalls are most definitely not created for comfort, and the floors are made of stone concrete. Standing in the same position, while heavily pregnant, for so long causes the mares’ legs to swell to dangerous and painful lengths, and many of the mares experience huge levels of distress. (Wouldn’t YOU be distressed if you were heavily pregnant and shoved into a box for six months where you didn’t have the room to sit down, AND you were dangerously dehydrated?)

The company that makes Premarin ®, called Wyeth, actually pays these PMU farms more if the urine is more highly concentrated with estrogen. This means that the farms are deliberately depriving mares of water, so that the urine contains as much estrogen as possible. The mares are constantly thirsty, and the lack of water makes them very susceptible to liver and kidney disease.


The horses are constantly kept impregnated, as the estrogen is only strong enough during pregnancy. There is a “Code of Practice” Wyeth created for PMU farms to follow, but it is voluntary, not mandatory, and there is no government regulations for the treatments of these mares.


And of course, with pregnant mares, there will eventually be foals. Unfortunately, these “living byproducts” receive almost harsher fates. The foals are worth less then the urine the mothers produce, and PMU farms don’t want mares taking the time to raise foals, they want them pregnant again.


Nine out of ten fillies (baby girl horses) are sent off to “death auctions”, while forty nine out of fifty colts (male horses) are sent to the auctions. The female horses that are kept are to replace PMU mares that have died in the last year. The very scarce male is kept around for breeding purposes only.


The foals are literally worth more to the company dead than alive, and every year about 70,000 baby horses are cruelly sent to auctions. Here, two month old foals, way too young to have been weaned, huddle together for comfort, confused and scared to death, and all of them are hungry. They can be seen trying to nurse off each other desperately.


At these same auctions, any PMU mares that haven’t died on the farm and have reached around fourteen are also auctioned off. At fourteen, they are considered past their prime, and if they come to the auctions with a foal, they are separated into separate pens. All day long you can hear the heartbreaking sound of foals calling out to their mothers.


The foals are put into pens where they are literally sold “price per pound.” Almost all the foals are bought by “kill buyers”, who buy unwanted foals cheap and sell them to slaughterhouses.


Every year, 25% of PMU mares die per farm, and have to be replaced. The ones that don’t die are eventually tossed to the slaughterhouses.


And the horrible part is that there are other estrogen supplements out there, made from natural ingredients, like yams and soy, that are ETHICAL, SAFER, and CHEAPER TO MAKE. There is NO excuse to continue this savage practice of using pregnant mare urine. It isn’t even completely safe to have estrogen that is suited for a thousand pound animal in a human body, and many women have bad reactions to Premarin ®.


So what can you do to help stop this? Well first, never take Premarin ® for menopause symptoms, and if you know anyone who does take it, share with them the background of the drug, because odds are they don’t even know. Switch to natural plant supplements. Boycott Wyeth. Educate others on the cruelty behind the PMU industry, and support organizations like the United Animal Nations and the American Horse Defense Fund.


This is a vicious, unnecessary problem that needs to stop. 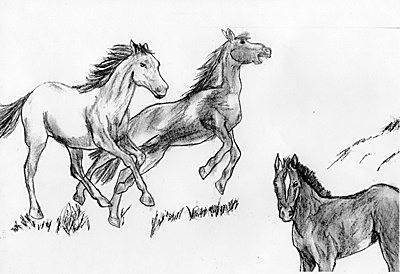 The author's comments:
I learned about this a few years ago, and the complete cruelty that centers around PMU mares was something I felt needs to be told to the world.
Post a comment
Submit your own

View profile
Thank you for being a muckraker in our society. We should know what's going on, so we can stop what's going on behind closed doors. Good job!
fightstall said...
on Nov. 29 2011 at 3:40 pm
Too many people don't know about this disgusting practice. Your information is correct, thank you for spreading it.
Sarah Lynn said...
on Dec. 26 2010 at 2:17 pm
Uh oh, I think my mom takes Premarin. I gotta show her this article, everyone should know about this. Its horrible!
Maggie said...
on Dec. 26 2010 at 2:14 pm
Oh my gosh! This article almost made me cry...but it is VERY well written. Good job.