My family and I are constantly on the lookout for an evil villain. He is always ready to attack. He haunts me, my dreams, my family, my kitchen, my food. He is constantly thinking of ways to poison me, to make me lie in bed all day in agony. He is cunning, lurking in the darkest corners of my pantry. Though I am vigilant, he often slips into my presence wearing the most innocent disguises. His name is gluten.

During spring break sophomore year, I was researching inheritable diseases for a biology project. I was browsing online for interesting ones, and randomly chose celiac disease. Coincidentally, the following week I was ­diagnosed with it.

My life changed immediately. No more pizza with girlfriends. No more cake at birthday parties. I suddenly had to always be on the watch, checking food labels, interrogating my server at restaurants, even questioning the food my grandmother put in front of me. I would always know if the tiniest bit of gluten was in my food; my stomach would feel like it was going to explode and my head had little people hammering inside it. My energy faded, and I felt like a slug. It was only after I quit eating gluten that I realized I had felt this way all the time.

Though being a celiac is difficult and stressful, it is one of the best things that has happened to me. After I started my new gluten-free diet, it was like I became a completely new person. My stomach felt happy and my appetite returned. I didn't get sick anymore. Not only did I heal physically, but mentally I felt healthy and full of life, as though I would never feel bad again. To put it simply, I felt great.

Being a celiac has opened the door to a whole new world of food. I discovered so many foods from other cultures that I had no idea about. For example, quinoa is a grain the Mayans held sacred. It's gluten-free, and I eat it every day now. Teff, amaranth, xantham gum, and potato starch – all foods I had never heard of – are now part of my diet. And, because we have to make everything at home to avoid the risk of contamination, my family has also become an accomplished band of cooks.

My celiac story is definitely one my family will retell many times in the years to come. I don't think it was a coincidence that I ended up being my own biology project. Celiac disease is something that defines me, and I embrace it; I like not being an average teenager. I like being the one who brings risotto with saffron for lunch instead of a turkey sandwich. I really love what makes me unique, and I feel sorry for those who don't know the satisfaction of being different. 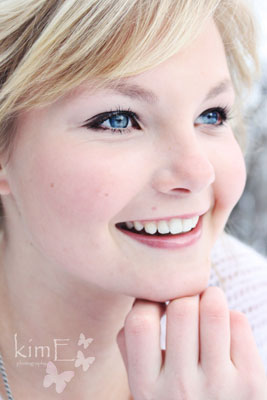 Favorite Quote:
A question that sometimes drives me hazy: Am I or are the others crazy?

View profile
I swear, for every sentence I read, my first thought was always "I know, right!" It's great to hear these words coming from someone other than myself, I was smiling so much. Thank you for writing this!
MaryTD PLATINUM said...
on Jul. 24 2012 at 3:42 pm
MaryTD PLATINUM, Burns, Oregon
42 articles 68 photos 105 comments

Favorite Quote:
"To be great you must first be good."

"I'm not going to stay dead the rest of my life!" - Theo in The Kestrel

View profile
This is a great story! My two best friends were diagnosed with gluten allergies and celiac disease at the end of freshman year, and they went through the same thing you described. Great job on keeping a happy perspective!
Emilytheelf BRONZE said...
on Dec. 28 2011 at 12:24 pm
Emilytheelf BRONZE, Harrodsburg, Kentucky
3 articles 0 photos 2 comments
View profile
Thanks! I really appreciate that :)
beautifulspirit PLATINUM said...
on Dec. 27 2011 at 6:21 pm
beautifulspirit PLATINUM, Alpharetta, Georgia
35 articles 0 photos 1398 comments

View profile
Well, before this I had no idea what a celiac disease is. Definitely a unique story~