When I was 10 and realized I was attracted to men, I decided to tell my mother. Despite being from Korea, a very conservative place, she claimed to have no issue with my being gay. Yet I often saw her cry at night. When I asked her why, she explained she worried about my safety in a society that demonizes homosexuality. At 10 I didn't think much about her words, but as I grew, they began to ring true.

A typical conversation between middle school boys in 2006 went something like this (and I'm pretty sure it still does):

“Let's go do something less gay, man. Stop being a fag.”

When I realized these boys were using “gay” as a derogatory term, I was confused. What's so wrong with liking a boy? And why would reading make someone gay? I felt a sense of being disowned by society at 11, but I also believed that anyone who said things like this must be pretty ignorant.

When I started high school, the bullying reached an all-time high. I lived in an all-boys dorm, and the other 14-year-olds constantly laughed about gay people, sexualized women, and made jokes that I found disconcerting. Boys would pretend to be gay with one another and find it hilarious. Once they figured out that I was gay, certain boys refused to speak to me, others would laugh at me, some would try to entice me and then laugh at me, and some simply watched.

One of my worst bullies was a kid I'll call Max. Max was large and fit since he played football. I knew he wasn't a bad kid at heart, and I believed he played up his hatred of gay people to fit in. When Max asked me to wrestle him (another thing that freshman boys did in my dorm), I was eager to take him down.

Weirdly enough, I really believed I could beat Max, and I did. I caught his head in my arms and entangled my body around him so he couldn't move. I guess those figure skating classes and ballet lessons paid off. Freshman boys tend to marvel at physical strength, and because I had overpowered the biggest kid in the dorm, they were amazed. I think they were particularly amazed because they had grown up being told that gay men are feminine and weak.

To be honest, my life was horrible. I was constantly ostracized and told I didn't belong. But I realized that the most important thing I could do was change the way people thought. I needed to teach not only these boys but every intolerant person at my school (and eventually the world) that people are multidimensional and unique. That's when I decided I was not going to go to war with my peers, nor was I going to run away. I was going to befriend them and show them that I was more than a gay stereotype: more than anything, I was human.

Quite frankly, it didn't take much to make friends. I was funny, I danced, I played computer games intensely. All I needed to do was have them see me for who I was. My peers grew to like me, but more than that, they learned to see past my sexual orientation.

A few years later, I became friends with Max, the kid who had tormented me freshman year. It started with him trying to get me to join the football team. He would say, “So, I know a bunch of coaches who want you to join the football team” or “Dude, you would be awesome at football. I've never had anyone put me down like you did.” Though it could have been a good chance to show people how multidimensional I was, I just wasn't interested.

I was surprised when I found Max at choir one day. He had a great voice. I remember how he just came in and casually stated, “What's up?” Meanwhile, I was thinking, What the heck is this jock doing here? Since we were in choir together, we got to know each another better and became friends. And one day we started talking about freshman year.

Me: “Remember how freshman year we didn't have to work at all?”

Max: “Wait, I always thought you were studying in your room.”

“No way, man. I was playing computer games. I just didn't like going out 'cause uh … you know.”

“Oh, I forgot all about that. Wow, I didn't think you'd actually not want to leave your room because of us.”

“Dude, I was so stupid then. I'm really sorry. I didn't realize how much it was hurting you, but I also knew I was being a real jerk.”

“Yeah … It's cool though. Thanks for apologizing.”

“Who else bullied you?”

“Colby, Steve, Julius … But what hurt the worst is that none of the teachers helped me. No one really was on my side.”

“You were pretty bad, but Julius was pretty bad too. He told me to go hang myself.”

We ended up becoming decent friends and I began to see Max as more than the guy who had bullied me freshman year. Interestingly, Julius also apologized eventually.

Never did I think at the beginning of my freshman year that by junior year, boys from that dorm would sincerely apologize for how they treated me. It took me by surprise. My experiences with Max proved my belief in the multidimensional nature of people. I think the best part about him, however, is that he was able to take a step outside of his “masculinity zone,” defying the stereotypes that society had put on him.

To a certain extent, I like to think that I helped kids in my grade understand that doing what you want to do, trying new things, and building passions doesn't have to be limited by gender roles, age, or especially society. These people will hopefully hold this understanding throughout their lives and teach it to their children. All of that was worth enduring any pain on my part. I have constantly been bullied and hurt. But despite all the pain, or perhaps thanks to it, I was able to help make a more tolerant world.

Even today, I live in an intolerant world. Sometimes the world is more horrible than the bullying at school. Sometimes it's a radical Christian priest, or maybe it's a very conservative teacher, but regardless, it is inevitable that I face discrimination for now. However, in this struggle, I also find benefits: the benefit of knowing that if I live and work to my best abilities, I can help others develop into more tolerant and accepting people. 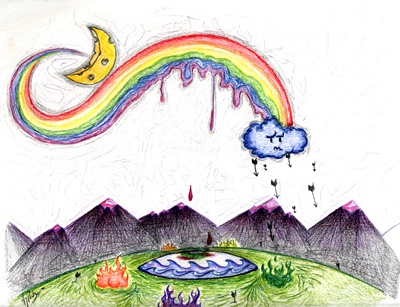 The author's comments:
About me being both Gay and Asian, and how I faced certain adversities, and what I've learned from them.
Post a comment
Submit your own

Favorite Quote:
- "A coward may survive...but a hero..a hero lives on in the hearts of the people he saved"

- "Words don't have the power to hurt people, unless the person who said it means a lot"

-
You say that love is nonsense. I tell you it is no such thing._

View profile
That was simply, it was inspriring. It had all the elements an articles needs, Humor, Repetion, alliteration, facts, speech. It had everything. I can not find a room for improvement. I am in awe of your work and look forward to reading you other articles. I can understand why you got editors choice. Bravo!