The inequity of the North American indigenous demands a redress

Native Americans (or First Nation peoples, as is the official term in Canada) have had it hard for a very long time. Following the settlement of Europeans in their lands, they were expelled from these sacred lands and forced onto reservations with little arable land and resources to utilize for survival. On top of that, many Native children were subject to assimilation in poorly-conditioned boarding schools in the United States and Canada. Today, the reservations of North America remain impoverished and lacking in essential public health tools; as an example, only one out of three residents of the Navajo Nation have access to safe, indoor plumbing, something that many Americans can take for granted. But the truth is that the original settlers of the Americas -- those who constructed civilizations on par with European ones in chemistry, mathematics, culture, and astronomy -- have had each of these elements ransacked and destroyed, never to be seen again.

Many of the boarding schools built to house Native Americans were constructed at a period in which scientific racism was gaining traction; many leading whites at the time believed that it was their duty to "civilize" what they viewed as savages through conversion to Christianity and forced adoption of Western names and traditions. To this extent, the practice of Native traditions nor the use of Native languages was not allowed for many of these children, with the goal of ensuring the extinction of Native culture over time. Native children were instead taught how to farm according to European methods and how to dine the European way. The food that the Natives ate would often be grown on these farms rather than brought in through other sources as these schools often had limited budgets.

Given such circumstances, the treatment of Native children in these boarding schools was harsh; evidence has documented not only poor living conditions, but also experienced mental, physical, and sexual abuse at the hands of those charged with caring for them. While some would later recount a positive experience, the cemeteries now presently unearthed near these former schools are demonstrative of the heavy toll the assimilatory practices took on these children.

With these experiences, the trauma garnered from them, and the enduring inequities that the indigenous across the Americas experience, it is time that decisive action be taken to ensure these issues come to an end. The Canadian government should begin an immediate investigation into these boarding schools and provide the necessary tools for their survivors to overcome the horror that they should never had to face. The United States government, meanwhile, should use the opportunity presented in its bipartisan infrastructure bill to advance the socio-economic goals of Native Americans, beginning with the installation and modernization of water pipes in cooperation with tribal authorities. Furthermore, measures should be taken to allow for greater tribal autonomy in education and the restoration of tribal practices and artifacts.

Most importantly of all, however, the ability of the Natives to support themselves economically should be considered a priority, for as long as Native-owned enterprises and businesses do not gain traction, and Natives begin to be seen in the ranks of Harvard and Yale Law School graduates, the inequities between the indigenous and non-indigenous will persist. Both Canada and the United States should work with tribal authorities to encourage the growth of and actively support indigenous enterprises.

What is additionally important to be considered is the relationship of the Crown to the indigenous, and the role the British royals played in these efforts to suppress indigenous culture. While a complete atonement and reparation for the past may be impossible, the modern role of the Crown must be taken into account.

The truth is that the British royalty, as the figureheads of their nation (and of 15 other Commonwealth realms, including Canada), have greatly modernized their public image in the last several decades, particularly with regards to social issues. The complete tolerance, if not acceptance, of the possibility that one of their children may be LGBT by the Duke of Cambridge, as well as King George VI's private comparison of South African pro-apartheid politicians to the Nazi Gestapo, is reflective of the journey Britain and her Commonwealth allies have made throughout the past 60 years. Rather than toppling their statues and calling for the loss of their authority in Canada, perhaps Canadians outraged and shocked by the discovery of these tombs would be better served in working with the Crown to begin to resolve the inequalities between the indigenous and the non-indigenous.

Whatever the course of action going forward, it is clear that the status quo of the Native American demands a redress. It demands action, to tie up the loose ends of cultural destruction and economic disenfranchisement. While the appointment of Mary Simon as Governor-General is a welcoming step, the current problems facing the indigenous will not go away without concrete action. 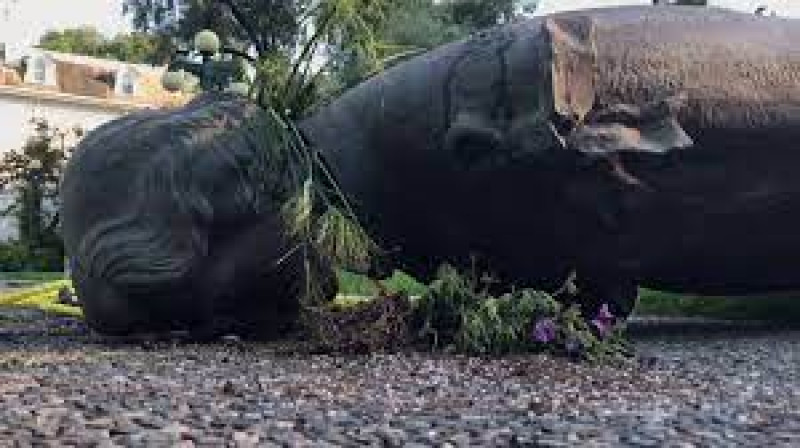 There has been a lot of fury over the discovery of the mass graves of Canadian indigenous children who were subjected to harsh conditions in residential schools designed to root out their identity as First Nation people. This fury has been directed at the symbols of Canada's past: the monarchy. Statues of HM Queen Victoria and HM Queen Elizabeth II have been toppled to the cheer of protesters.

However, as I argue, regardless of the criticism I may face, such acts of anger against a Canadian monarchy have no merit; they are unjustified. It is true -- as I make clear -- that the economic and cultural inequity that faces the indigenous of Canada and the United States demands a solution. But toppling statues and defacing monuments erected to celebrate the deeds of a Canadian head of state -- of a woman who has sought to carry out her duty well into her 90s -- will not even begin to resolve the problems at hand. Only resolute and immediate action by PM Trudeau and President Biden will begin to heal the long-opened wounds of the indigenous in North America.