Favorite Quote:
Dance like nobody is watching, Cheer as if nobody can hear you

If you are somebody new to wearing glasses, and you see people on movies/television programs getting bullied because of them, you might feel scared. I say wearing glasses is just for seeing, and bullies should understand that. You can’t help that your eyesight is not up to par. People should know that glasses are just a way of life.

Most bullies bully people because they have problems of their own. Most bullies have problems at home or maybe at school. Some bullies bully people to get their anger out. Several bullies might try to prove something to people. In this case the bully would be trying to prove to people that kids with glasses are weird or abnormal. People with glasses have glasses so they can see, not because they wear them to try to be cool. Many bullies share some common characteristics. They like to dominate others and are generally focused on themselves. They often have poor social skills and poor social judgment. Sometimes they have no feelings of empathy or caring toward other people. Although most bullies think they're hot stuff and have the right to push people around, others are actually insecure. They put other people down to

make them feel more interesting or powerful. And some bullies act the way they do because they've been hurt by bullies in the past — maybe even a bullying figure in their own family, like a parent or other adult. Some bullies actually have personality disorders that don't allow them to understand normal social emotions like guilt, empathy, compassion, or remorse. These people need help from a mental health professional like a psychiatrist or psychologist

Glasses are just like an accessory. You wear them so you can see. With jewelry, you wear it to look cute. Most bullies on television and movies don’t look so attractive, but in the real world some bullies like to look decent. If they do, they should know that people with glasses have to wear them or they are or going to look like a dork running into walls. Just like you might look like a dork trying to wear a necklace with an outfit that does not match it. If bullies can understand that, then why are they bullying people in the first place?

Bullies make kids feel self- conscious about themselves. Some kids might not even wear their glasses around places because they are afraid to get bullied; these kids are going around blind. Some kids want to get contacts instead of glasses so the bully could not make fun of them anymore. Several kids have stigmatism, and are not able to wear contacts. There for they also will not wear their glasses, they may even decide to continue to get bullied. Bullies do not realize that they are making kids feel awkward causing them to change their appearance.

Bulling kids with glasses is wrong in every way. These kids cannot help their own eyesight. These kids should be left alone, and let them live a normal life. I wear glasses myself, and I sometimes get talked about because of them. It does hurt my feelings, and I don’t think those people know what it feels like to bullied over something I cannot help. Bulling people with glasses should be stopped. 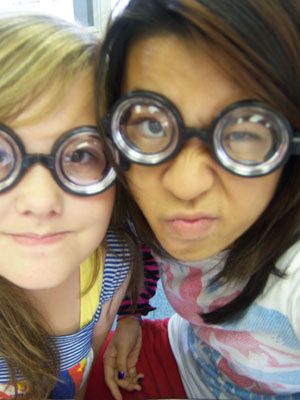 The author's comments:
I, myself wear glasses and I thought I could express how I feel about the topic on the website.
Post a comment
Submit your own

Kensha said...
on Aug. 14 2011 at 6:23 pm
Hello i am 11yr old kensha from st.lucia i have this problem have been wearing glasses for about 5yrs or and i have gotten bullied called four eyes ever day i cry to my pearents and they come several times in the school