The scarcity of packages beneath the tree was appalling. The brightly colored paper failed to hide the hardwood floor, just as it failed to mask my disappointment. Each year, when the holiday rush set in, my father warned me and my sister not to get too excited, not to expect many gifts, and until now, it was understood that he was kidding.

This Christmas, however, as I crept downstairs, I noticed an eerie ­silence had replaced the traditional Yule log. The kitchen smelled of dish soap and pasta, not cinnamon buns or pine. When my family came downstairs, we flocked to the family room to unwrap the few presents beneath the tree. Everything I had come to associate with Christmas had vanished, leaving me ridden with discontent. My father’s pre-Christmas speech had held true; my parents had chosen not to spend lots of money on gifts. Only one aspect of the morning was the same as in years past – the love in my parents’ faces.

As I adjusted to the unfamiliar scene, I began to see things I had never noticed. I was drawn to my parents holding hands on the couch. I became aware of my sister’s unusual kindness. Looking around, the absence of boxes and bags became less obvious. In their place was the love of my family that I often took for granted. This love and support cannot be limited to Christmas day, nor can it be properly ­expressed through idle gift-giving.

While we disassembled our stockings, I cared less for the nail polish or hair clips that awaited me. I already had received their real value – the love of my family. 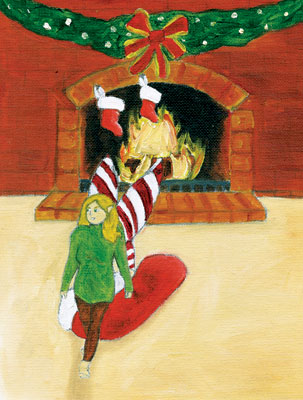