3 crazy theories about the universe

Have you ever wondered about how the universe works? After watching Spider-Man: Into the Spider-Verse and Avengers: Infinity War, I’m sure we all wondered about alternate dimensions and the factors that shape reality. Well, many scientists and philosophers have attempted to answer these mind-boggling questions for centuries, but here are a few of my favorite theories that try to explain the workings of the universe.

*Disclaimer: These theories are ever-changing and as new evidence comes to light, some previous ideas can fall into disuse.

This theory attempts to create one overarching set of rules for the universe, merging quantum theory, particles, and forces (except gravity). Previously, we used quantum field theory, assuming that all elementary particles (defining the existence of particles like quarks).

This idea was a good predictive model, but it conflicted with Einstein’s theory of gravity. Gravity is not facilitated by particles and relies on exact measurements, which according to the Heisenberg Uncertainty Principle, is near impossible on the quantum scale.

What has more dimensions than a point? A line. By defining certain particles as different vibrations of a string, scientists could describe gravitational force along with the standard model of the universe. Think of different particles as different notes a violin can make; even though the violin uses the same four strings, it can make different sounds.

But don’t get too excited; string theory needs 10 dimensions to apply to our reality, and we currently have only 1 temporal and 3 spatial dimensions. (Want to know more about String Theory’s relationship to extra dimensions? Here’s a video for you: youtube.com/watch?v=kF4ju6j6aLE.) A new string theory named M-theory needs 11 dimensions to work… However, the math for this theory is sound, so scientists and physicists can use it to explain some phenomena.

2. Dark Energy: The reason why we are accelerating away from everything else in the universe.

What do you know about gravity? It’s the reason we are attracted to objects with large masses, like the Earth and the Sun. Well, yes, but it’s also a geometric model of space-time, mapping out the universe according to our dimensions. Theoretically, the universe came into existence with the Big Bang, spewing out galaxies and stars. Shouldn’t the gravitational attraction between galaxies like the Milky Way and Andromeda pull them together and eventually drag everything together?

Surprisingly, astronomers realized that the cosmos is doubling in size every 10 billion years due to an anti-gravity force coined dark energy. If dark energy grows denser and changes, it may become an inconceivable form of energy called phantom energy. One example of the peculiarities of phantom energy is that an object could lose energy while speeding up, which is impossible in standard physics.

This 9% difference led a John Hopkins group to create an early idea of dark energy. They believed that there were fields of anti-gravitational energy known as quintessence, a form of phantom energy. Sometimes, the quintessence would repel, attract, or alter gravity in unimaginable ways.They primarily focused on hypothetical particles called axions for the composition of the energy fields.

If dark energy continues to persist, everything outside our galaxy would be moving away from us faster than the speed of light. Our night sky would become dark and starless.

Scientists began pondering if dark energy was a temporary phenomena. However, dark energy has increased over time and can lead to a disastrous situation called the “Big Rip”, where all atoms and elementary particles would be, quite literally, ripped apart due to the effects of anti-gravity. Scientists are trying to learn more about dark energy to explain the past and guess the fate of the universe. (Here are some other theories about the end of the universe: youtube.com/watch?v=itpLU7OzNV8.)

Black holes have been a huge topic of discussion, from the physics of their presence to the information paradox (if you want to learn more about this, here’s a good TedEd video to get started: youtube.com/watch?v=r5Pcqkhmp_0). Black holes are formed when stars of enormous mass (much larger than our sun) reach the end of their lifetime and collapse in on themselves. This creates a location (singularity) of infinite density that rips a hole through the fabric of space-time, sucking in surrounding particles with its immense gravitational force.

White holes are basically the opposite: they are theorized to spew out matter and light. If space-time were a shirt, an Einstein-Rosen bridge could be created if you folded the shirt so a black hole aligns directly atop a white hole (or vice versa because up and down is relative in space). The black hole would feed the white hole, creating a tunnel in between two locations in space-time.

A Penrose diagram shows how every black hole corresponds to a white hole, potentially connecting our universe to alternate parallel universes.

Theoretically, we can condense light-years of travel into a couple of seconds, and even manipulate time. However, before your dreams of interstellar travel overwhelm you, you must know that wormholes are extremely unstable and need to be filled with exotic matter (objects with negative energy and negative mass… I know, an object can’t have a negative mass, hence the name “exotic”).

I hope these theories have made you curious about what is out there in the vast expanse of space.

Bates, T. B. (2018, March 23). Physicists at crossroads in trying to understand universe. Retrieved from phys.org/news/2018-03-physicists-crossroads-universe.html

Overbye, D. (2019, February 25). Have Dark Forces Been Messing With the Cosmos? Retrieved from nytimes.com/2019/02/25/science/cosmos-hubble-dark-energy.html

Sutter, P. M. (2020, April 3). Stuck at Home? What to See in the Night Sky this Month. Retrieved  from discovery.com/science/stuck-at-home--try-looking-up-

What Does Dark Energy Look Like? (n.d.). Retrieved from pbs.org/wgbh/nova/video/what-does-dark-energy-look-like/ 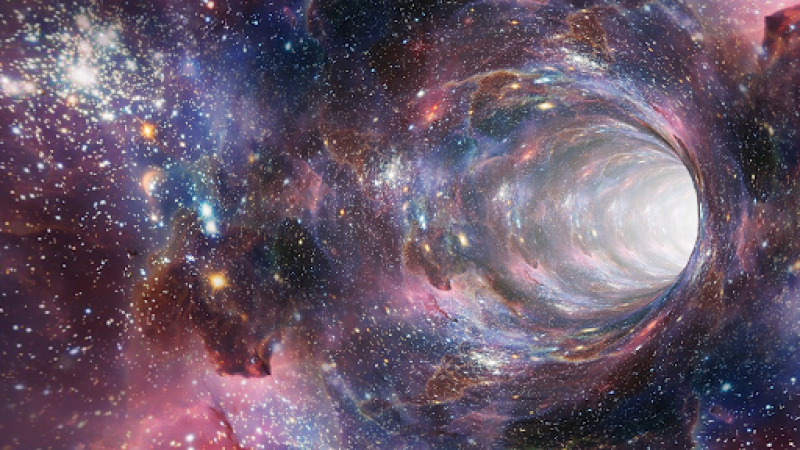 It is incredible to ponder how little we truly know about the universe we live in...

Favorite Quote:
What happens if your choice is misguided,

You must try to correct it

But what if it’s too late? What if you can’t?

Then you must find a way to live with it.