The aspects that contribute to a woman’s identity are incalculable and complex. Leonora is an intricate character in Ford Madox Ford’s The Good Soldier, not only as a woman, but as a wife. Her search for identity throughout the novel is constantly rooted to her loyalty to her husband due to her Irish Catholic background, economic upbringing, and unspoken wish that her husband will return to her after his numerous affairs over the years, which she facilitates to a extent. The Good Soldier is a novel of irony, hidden joys, and the appearance of morality. Throughout this story of complex affairs, secret relationships, and the masks the characters put on, Leonora’s intentions are to preserve her status in society and cause as little trouble as possible. In gearing all of her actions toward influencing and assisting others, Leonora is, in truth, attempting to mask and relieve her own emotional turmoil.

Considered to be Ford’s greatest novel, The Good Soldier was written during a period when traditional authorities were challenged, and women were violently demanding the right to vote. A loss of resolute social rules paved the way for innovation and change, and, ironically, the beginning of World War I restored an order to the disarray. Similarly, Leonora’s actions throughout this novel bring sanity to a world that is crumbling around her. Unlike Florence, who controls by deception, such as her feigned heart condition, Leonora controls her husband’s affairs very methodically, with a full understanding of what is happening. While Florence commits suicide when she doesn’t get her way, Leonora is stronger, and is determined to keep playing her part as wife even when everyone around her is fraudulent. Dowell, the narrator, spends the entirety of the novel struggling to make sense of the world, while Leonora struggles to pull it together. Knowing full well the evils and imperfections of society, she must accept the world as morally chaotic in order to continue her legal, if not romantic, marriage to her husband. The famous opening line of the novel states that this is the “saddest story” Dowell has ever “heard,” which implies that while the action was happening around him, he is blind to it, and only comes to full realization years later. He himself states, “The whole world for me is like spots of colour in an immense canvas” (7). Even after Leonora asks Dowell, “Don’t you see what’s going on?” (23), he fails to comprehend the obvious romantic connection.


Edward, Leonora’s husband, is neither very good nor much of a soldier, ironically. He is selfish in his alleged heroic acts, but is in the wrong because his passion overcomes his practicality and concern for the well-being of the people he loves. Leonora, too, has a passionate heart, but her practical mind limits her rash outbursts and breakdowns. Edward’s cowardly death by penknife after he looses the adoration of his last affair, Nancy, is the ultimate capitulation of his wife’s power; by telling Nancy what a horrible husband Edward is, she crushes her ideals and reveals the true immorality behind Edward’s advances. This situation, similar to Lenora’s slap to the face of Maise Maiden, which symbolizes her “striking the face of an intolerable universe” (31), is Lenora’s major breakdown in the novel. Though she keeps the impression of content the majority of the time, her sentiments build up in her until she is unable to handle living an emotionally suppressed life simply to keep her marriage. Ultimately, Leonora is unlike any other character in the novel not only for her full awareness of the unraveling of events, but for her desire to take charge to manage them and eradicate public scandal.

Leonora represents the new, powerful woman, but the bind of marriage slowly breaks her down. Dowell compares the intimate relationship of the two couples to a “minuet de la cour” (3), using euphony to relate the consistent manner in which they live to the rising and falling repetitions of a musical piece. Similarly, Leonora’s marriage to Edward arbitrarily binds her to a pattern she doesn’t necessarily fit, and it becomes suffocating to her. While she loves Edward, she grows to hate his outrageous impracticality: “Yet, Leonora adored him with a passion that was like an agony, and hated him with an agony that was as bitter as the sea” (15). The line between love and hate is a thin one, and their circuits share identical structures in the brain (www.dailymail.co.uk). Hate is an emotion that derives from caring; it is impossible to detest someone without being concerned about them.

In the beginning of their marriage, which is arranged by their fathers, Leonora is, perhaps, “too obedient” and “her eyes [follow] him about full of trustfulness, of admiration, of gratitude, and of love” (83). Leonora’s initial concern for Edward is due to her innocence coming out of the convent in which she lived, before discovering the truth about the man she has committed herself to for life. This truth proves to be too much for her, and causes the line between love and hate for Edward in her mind to snap, ultimately tainting her love life. As Dowell states, “Delusions are necessary to keep us going” (27). Without the delusion of a happy marriage, Leonora is forced to recreate a false sense of joy by taking control over her relationship. In order to keep herself sane in the life she has been bound to by her church, she begins handling Edward’s finances and affairs, and is therefore able to confront the truth and continue dealing with her situation.

Leonora’s perception of being on the outside of every affair she witnesses is reinforced by the difference in her religious affiliation from her husband’s. While looking over Martin Luther’s Protest, Florence states with an aloof air, “If it weren’t for that piece of paper you’d be like the Irish or the Italians or the Poles, but particularly the Irish” (25). The distance created by Leonora’s Irish Catholic background cuts deep into her, and Dowell compares her face on that day to “that of a person looking into the pit of hell” (26). By condemning divorce and deeming marriage an eternal binding, Leonora’s duty to her church stands between her duty to her husband and her duty to herself. Her motives are “to show that Catholic women do not lose their men” (58) and to “[try] to keep things together for the sake of the children who [do] not come” (88). Leonora’s emotions are being forced toward hate toward her husband while her allegiance to her family and her church keep her rooted to her place in society. This drives Leonora mad as she struggles with her search for identity.

Coretta Scott King once said, “Hate is too great a burden to bear. It injures the hater more than it injures the hated.” Leonora’s emotions throughout the novel are suppressed, hidden to keep scandal from uprising. Dowell, even the dimmest of narrators, observes, “And there was always a gold circlet with a little chain supporting a very small golden key to a dispatch box. Perhaps it was that in which she locked up her heart and her feelings” (18). Dowell describes Lenora as normal, which to him connotes a sense of coldness, boredom, and lack of passion. In fact, this is a delusion caused by Dowell’s ignorance to female assertiveness because he finds it threatening. Calm collectivity is a mask Lenora wears, when in reality her power and her passion attempt equal and oppose that of the adulteresses in the novel, in order to regain control over her husband’s relationship.

According to Maslow’s Hierarchy of Needs, a person’s love and esteem needs must be met before they become self-actualized. This includes friendship, family, confidence, respect for others and respect by others. While Leonora has a sureness in her actions that suggests confidence, she is little respected by others, especially Edward, who attempts to “preserve the virginity of his wife’s thoughts” (32), when in truth he is disrespecting her and breaking her down slowly. In her instinctual attempt to become a self-actualized being, Leonora gears her actions toward maintaining her relationships and hoping that love will return into her life. While she is tempted to “cause the horrors and pains of public scandals” (105), she focuses on suppressing her hate and managing the world around her not only because “she had been drilled-- in her tradition, in her upbringing—to keep her mouth shut” (105), but also because “she [has] the vague, passionate idea that, when Edward had exhausted a number of other types of women he must turn to her. Why should not her type have its turn in his heart?” (107). Her wish is to prove that, “in an unfaithful world one Catholic woman had succeeded in retaining the fidelity of her husband” (110).

Throughout this novel of intertwined relationships, dishonesty, and deceit, Lenora remains completely committed to controlling ever aspect of her husband’s life in the hope that one day he will return to her. While this novel makes it, “impossible to believe in the permanence of a man’s or woman’s love” (67), Lenora is simply looking for love, something that every human craves. In her desire for this love, she attempts to calm and hide her own emotions by dealing with the affairs of others. But what began as deep love for Edward was driven to passionate hate by her basic need for acceptance, and his refusal to give it to her. By concerning herself with every detail of the life of her husband and all of his adulteresses, Leonora has, instead of getting her husband back, driven him to death because she is overly-controlling. As Dowell states, “All women are riddles” (13). 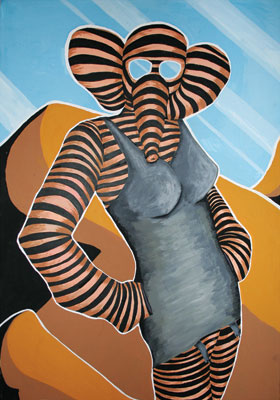 The author's comments:
Analysis of Leonora in Ford Madox Ford's The Good Soldier
Post a comment
Submit your own