Metamorphosis of Pizza: A new style of making pizzas

Vae Victus! Is the delectable pizza a consequence of ravishment of a virgin? Pizza, the resounding euphonious word stimulating extreme salivary reaction in pizza-lovers, though born in Italy, is presently one of the favourite delicacies of the world whose culinary recipe and process has been elucidated by variegated world-class master chiefs. This paper , however, intriguingly demonstrates the age-old procedure in precise details subtly employing the symbolism and imagery of the birth of the dough whose virginity is subsequently snatched and the progeny, pizza, is born to it, though not through individual conception, but in an act of immutable metamorphosis.

A mellowing, spongy dough is prerequisite to the preparation of the sumptuous piece of circular glory. For the birth of a 29 ounce dough, first, 2.2g of active dry yeast should be put in a small bowl in which 70g of lukewarm water (80°F to 85°F)  should be poured and whisked vigorously for about thirty seconds. An efflorescent foam would be belching out in an eruptive fashion from the heavenly mixture. If such a mysterious eruption remains invisible even after a most meticulous whisking exasperating the second hand of the clock, the yeast should be deemed as “dead” and as a fortune’s victim, the process must be again begun from scratch. Following the triumphant melody of the tinsels and bells of the birth of the dough in this foremost step, 453g of King Arthur Sir Lancelot Unbleached Hi-Gluten flour or  Tony’s California Artisan Flour ought to be combined with 10g of diastatic malt in  the bowl of a stand mixer fitted with the dough hook as an initiation to its graver consecutive steps. In the whirlpool of the mixer, 200g of freezing cold water in accompaniment with the previously prepared yeast-water mixture must be ritually poured and with the turn of a minute, the ceaseless rotation must be brought to a cease so that poolish or biga can be added to achieve the exotic flavour of Italian baking. The sacred,ritualistic fervour of the process is catalysed with the final besprinkling of refined sea salt to the mixture and commencing the circumambulation of the mixer. Then, with the cessation of rotation at the end of another minute, the dough should be pulled off the hook of the mixer using a rubber spatula and 5g of extra virgin olive oil should be diffused in the invisible depths of the dough uniformly. As a means of preserving the innocence of the dough, its well oiled physique should be kneaded until its surface is smoothened, following which, it must be wrapped in a pure damp dish towel.

Alas! Carpe diem in a Herrickean sense has dawned. Must the innocent dough be so outraged! Nevertheless,the anointed virgin dough must be brought and ritually laid in the bed of the cutting board where it must be tenderly penetrated with a dough cutter so that it gets halved. Finally, for a proper conception of delectable pizza from it, it ought to be refrigerated in an airtight pan for its gestation period of approximately two days.

At present, the delivery chamber ought to be prepared by preheating the pizza oven to  500°F for an hour and buttering the  surface of a 12 by 2-inch round deep-dish pizza pan where the enceinte dough must be flattened and laid with its edges rimming the pan,waiting to be richly embellished in magical robes. The procession of its grandiose enrobing ceremony is heralded by stately circular slices mozzarella cheese evenly wrapping the bottom the flattened dough,slightly overlapping the sides, followed by a quasi-immersion of precious gems of 8 ounces of crumbled meatballs in cheesy sea, and jewelled with 2 ounces of sliced pepperoni , 8 ounces each of Calabrese Honey Sausage and  Sweet Fennel Sausage. Half cups each of sauteed onions, red peppers and mushrooms ought to be diaphanously pearled all over the cheesy attires. Tiny diamonds of pecorino, sliced pancetta, should be dusted in the interlocking mortises of the necklace of peppadew pepper, which is then showered with Campari syrup and topped with shredded provolone.

Finally, on being urged by the excruciating afflictions of labor materialistically demarcated by its attainment of a stiffened, massy,mobile,transferable shape, the ritually garmented enceinte dough riding the chariot of the greased pan must be ultimately put into its preheated delivery chamber and baked for ten to twelve minutes until golden, wherefore, its isolated maternal existence ceases so as to be metamorphosed into the wholesomeness of the existence of its offspring, the palatable pizza.The crispy, golden, succulent pizza drizzled with Campari syrup and Saporito sauce and dollops of ricotta embedded in its corners is brought out of the chamber of metamorphosis,sliced with a pizza cutter and served with a generous portion of antipasti salad to be smooched and devoured. 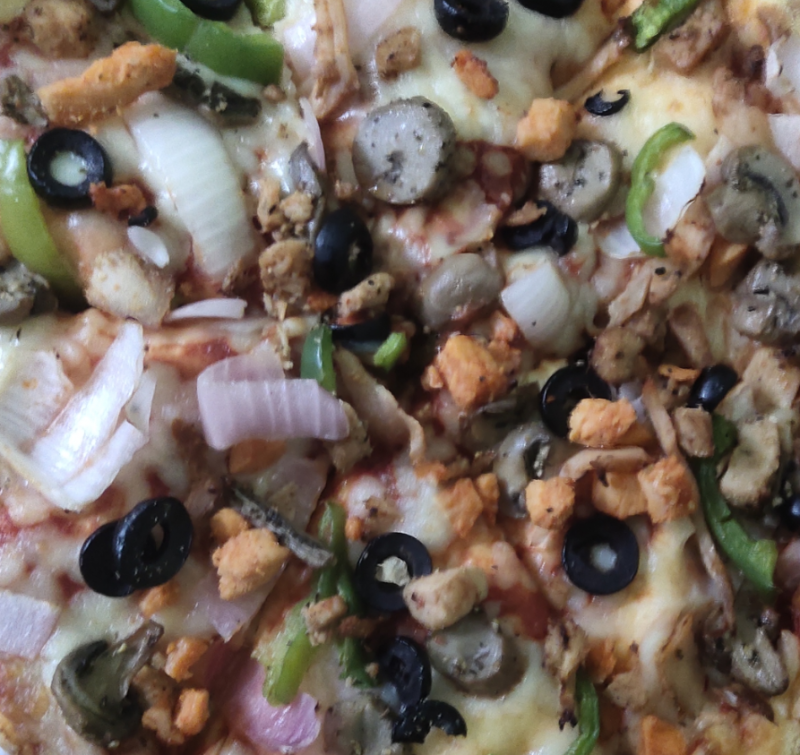 Hello, everyone. This is Sreeja. This article is one of those fun and jubilant articles which showcases a creative and metaphorical demonstration of the age-old process of preparation of sumptuous pizzas at home.