The night cooed fresh air into the sky at the hour of 1:00 am. Akane and Kimiko walked side by side on the streets of inner Tokyo to meet with the devil itself. Akane checked his watch and cell phone periodically for trackings of evil in the city. "We're almost close..." he said. Kimiko gripped her sword, ready for battle. Akane glared at her reaction as she stared into the dim lit darkness that followed her breath's of hot air smoking in front of her. Akane smiled and scratched his glossy black hair,"Well since it is pretty quiet, I might as well tell you the history behind the sword..." he paused as Kimiko's green flecked eyes looked up. Akane's eyes deepened, "Long ago...actually, LOTS long ago, there was a girl by the name of Diana. She was a free spirit, who loved nature and anything pure, and was brave enough to dare herself to help anyone, including her friends. Her green eyes sparkled in the night and day, and her shoulder length wispy blonde hair flowed with the wind's pull. She was a beauty..." Kimiko narrowed her eyes and yawned, Akane narrowed his and coughed, "ANYWAYS! One day she came across an ancient magical spirit fox at a waterfall that whispered her destiny to her, and said: "You must capture the pegasus of Dawn to aide you in the battle against darkness for it is a tough fight to prevail." The fox dissapeared and a white horse appeared in front of her. It was a wild horse, with sparkling blue eyes and a coat of winter that gleamed into the light. Diana peered into her hands and a rope appeared, the color of rich violet intwined with every flower of every garden. Diana ran into the tall grass to capture the pegasus of Dawn, but it was swift upon its feet and wings. It dashed her moves, bit her hands, and kicked into the sky shaking its sky blue mane. After a while, she gave up and cried on her knees bent, then began to sing. "Light wont fade, light is mighty, embrace my wings so I can fly. Dance around the angry stars, I blow kisses to Mars and the stars all fall asleep, yes the stars all fall asleep..." Akane brushed tears with his studded sleeve and continued,"The pegusus was moved by her song and allowed her to put the bridle upon his head. She named her new friend Waning and was granted with the sword you have now, Kitsune. Together they defeated evil forces of darkness to transform light and happiness into the world."
Akane sighed and looked at Kimiko who stared seriously at him. "Did you ever meet her?"
Akane's eyes watered red tears and turned his head, "...I...loved her..."
"Akane look!" 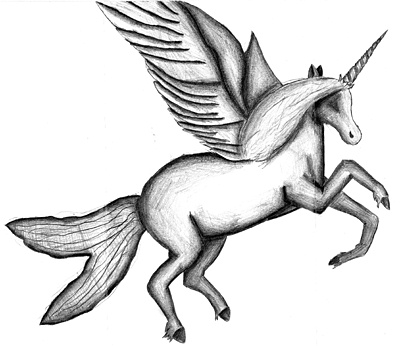 The author's comments:
Sorry for the late chapter! I have been BUSY! Enjoy:)
Post a comment
Submit your own