As Much As I Hate You, You Inspire Me Anyway | Teen Ink

As Much As I Hate You, You Inspire Me Anyway

Dear Coach Root,
Yeah, it’s true, I kind of hate you.
It’s also entirely true that you inspire me.
Seriously, Coach, though the Most Inspirational award went from Point A (you) to Point B (me), it’s a symbiotic relationship. I am inspired just as much by you as you by me. Possibly more.
I have run for you since I was a tot of eleven. Not always fast. No. Nor have I always worked hard – I can admit to days in junior high track when I slacked off a bit. Okay. More than a bit. A lot. And it does sort of make me sad. But we can talk about the despicable work ethic of most twelve-year-olds some other time. I have not always been your most dependable runner. But you have always been my most dependable inspiration.

Coach, you were there when I stress fractured my foot three weeks into sophomore cross-country season. I will leave out the fact that you kinda gave me the stress fracture, because I also kinda gave me the stress fracture. Anyway, you inspired me to come back the next year. You reminded me that I actually had started to get some sort of pitiful somewhere in the days before I was finally forced to quit. I realized, when you pointed that out, that there was hope even for the team slowpoke.
Two seasons of cross-country with you, Coach, and my recorded race times go from 38 minutes and some odd to 24:25. Even I know that doesn’t happen easily. Granted, I held back a lot. And when I say a lot, it was evidently as much as fourteen minutes or so, which is nearly five minutes per mile more than necessary if that helps put it in perspective, although you probably already had that figured out. But I’d never have learned not to hold back if you hadn’t driven up in the van, beside me where I was trailing the rest of the team by a good four hundred yards only two minutes into the run, telling me to keep moving. If you hadn’t forced me to get out of bed at 5:30 every morning and lie on the high school foyer floor, my face on the carpet among the goatheads, trying to catch a few extra minutes of sleep before you sent us out into the cold and the dark and the bite. If you hadn’t told me, time and time again, that you couldn’t put a boyfriend at the finish line for me – that I’d have to put him there if he’d be there at all, making me laugh. I’d never have learned not to hold back, Coach, if you hadn’t clapped me on the back after the race when I chased that cheating purple-haired Vallivue brat all the way down the chute, swearing like a sailor, and asked me where I’d learned to talk like that. I’d never have learned not to hold back if you hadn’t forced us to run the motocross track fifteen or twenty times in a practice, if you hadn’t yelled at us all for not trying hard enough when only two or three people were slacking off, if you hadn’t realized that there was hope for me, the slowpoke, who was literally, mathematically, only about half as fast as everyone else.
It took me a long time to learn this, but there is fight in me. There is fire in me. There is a me buried in there who will tear madly after the [redacted] she is losing to, cursing till the air around her mouth is blue, and whether you meant to or not, Coach, you brought her out. And here she is, ready to go run a faster race than she did last week, to edge girls from BK at the finish line and accidentally scream “No!” out loud instead of in her head, to go run like she was born to, to break out some massive cliché, without holding anything back.
I know, you’re sitting there thinking I’m a senior and I can’t ever run for you again, and there’s a strong possibility I won’t run for anyone else ever again either, just because I’m not that fast. And that’s all true. But it’s not the point. The point is now, no matter whether I’m running or not, now I know not to hold back.
So though I will never complain about the route or point out the smoke in the air or run down the road yelling "Root, you slave driver, you!" again, you may be sure that every time I told you I hated you (literally or not), I was just inspired underneath it all. 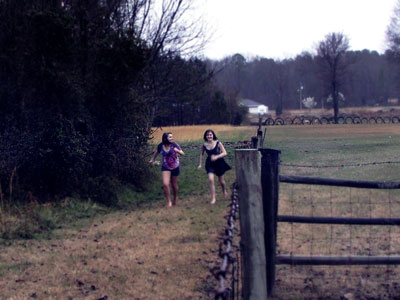 The author's comments:
a letter to my JH track coach/HS cross-country coach/running mentor/biggest fan
Post a comment
Submit your own