My paw paw, H. F. R., could be best described as one of the most ordinary, outstanding and silent heroes of America. No, he is not a preacher or the president, but he is everything in between! He is a gentle man possessing a great sense of humor and the best set of listening ears in this world.

Mr. R. is known throughout our community as a man of his word. From hauling kids to Little League games, providing floats for parades, or money and goods for concession stands, you name it, you can always count on him.

H. F. served as mayor of Big Lake for 16 years. During that time he not only took great pride in making our community better, he also donated his monthly paycheck to pay water and gas bills for the less fortunate. Not hesitating to help others, and not asking for a pat on the back or even a thank you, he continues to give without being asked. He truly believes that giving is better than receiving.

H. F. R. is also a very talented musician and singer. He has played with Roy Orbison, Charlie Pride, Red Stegall and even entertained the great Hank Williams, Sr. when he was a little boy. H. F. has helped raise thousands of dollars performing at benefits for families in need. He hires the band members out of his pocket, and then they play music, usually hosting a dance, and donate the proceeds to those with cancer, involved in accidents, or left homeless by fire. He never asks for praise, he just does what comes naturally, which is helping those in need.

When I was in the second grade, my paw paw was going to Washington, D.C. I told my teacher, and my whole class wrote letters to the President. Boy, was my paw paw surprised when I showed up at his house with a brown paper sack full of letters for him to deliver to the president. He did, though, and two weeks later my class received a letter and an autographed picture from President Clinton! Now if that doesn't put the "Grand" in Grandpa, I don't know what does!

To sum it all up, my paw paw is the greatest! He is truly a remarkable individual everyone should know and meet. H. F. R. has a heart the size of Texas and is a legend in his time. I truly believe he is an angel disguised as a husband, father, brother and last, but not least, my paw paw, my friend, my hero! 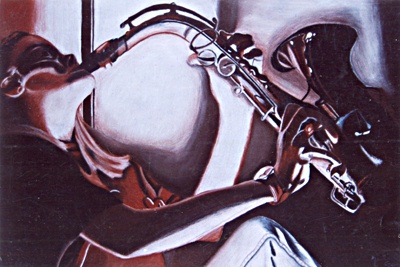