Favorite Quote:
"Be kind. Be smart. Be important." - The Help
"Don't let the fear of striking out keep you from playing the game." -A Cinderella Story

Since I was born, I received the most attention. I was quiet, creative and obedient. I ate my fruits and veggies and meat products which might explain my outstanding height. I learned to swim as an infant, was introduced to water no later than 6 months. It is in my blood, and as my parents have told me, I learned to swim before I could walk. I was determined to make them proud. As my swimming became more competitive, I joined a team, and was finally able to show off my skills. I was fast, faster than all of the silver group and was soon moved up.

In elementary school, I was nobody’s friend, always played with the boys, never with pretty little girls like me. It wasn’t until 4th grade did one move away and that was my chance to be the girl’s best friend. I tried and tried, but then gave up and my mom was especially tired of the call of a canceled play date. I would cry in my room and wait to see if the next play date would be real. As I entered the big kid school, I was introduced to more people but the ones in grade school still ignored me. My grades were terrible as I barely passed science and history class. For both 7th and 8th grade, I never liked those the teachers. Now I’m a big kid; a dream that everyone wants to accomplish, even me, too scared to go to big kid school. I was scared to become a teenager knowing there was more to school than I had thought. Many things to worry about: relationships, education, sports and becoming friends with the wrong group of people. However, since I am strong, I was able to overcome that awful fear and live everyday like an adventure. To me, high school is a fairytale. You write a story page-by-page, day-by-day, I tell myself. You don’t know what each day will bring, only a surprise. However, I love surprises so I can handle the challenging things and events a day might bring. I can handle the friendship problems and the dislike of many of my teachers. Sports are a whole different story to write. I’m a chlorine-smelling swimmer, lettered as a freshman along with three others. I am strong and will-powered; come upon each race like it’s the most important of all. I am cheered on and loved by my team; we always have each other’s backs. Nobody gets left out, unless you want to be of course, but that is your choice, not the coach’s.

I grew up with animals roaming the house since the day I was welcomed into the world. I was raised by two soft felt dogs and cats. They meant the world to me; always wanted attention like I did. We all came from a different background and I would tell them secrets knowing they would keep it in their hearts forever. Along with the animals came my brothers; and they took the attention away from me. However, I knew since I was the first child, I would always be the most powerful and strongest. My brothers are a year and a half apart, mischievous and crazy little boys. My mom tends to give up on the youngest one, so my name pops up. My other brother does his own thing, usually. My dad tries to help out as much as he can, but since he is a firefighter, he is usually gone every other day. In swimming, when I was put in the big kid group which involved mostly high school kids, I met the five best friends ever: Elena, Hannah, Hannah, Megan, and Sarah. I gave up on my school friends. They didn't treat like me a friend and never invited me to go places. I felt excluded but was determined not to fight. I hooked up with my swim friends more than my school friends. They accepted me for who I was. We do everything together: go to each other's homecomings, tell secrets and help one another during hard times. They are like sisters to me, always there when I need someone to talk to and can just sit there and listen to me spill my problem; always coming up with a resolution. I haven't and never will forget them.

The turning point in my life was August 18th, 2011. A friend who I deeply enjoyed being around and a good athlete, a good boy. He was 12. He died the hard way. No one expected his perfect life to end. Not even me as he was getting good grades in school, and was a big part of his soccer and swim team. The same one I was on. Nobody really knows why he did it. But everyone knows that it broke their heart. This 12 year old boy died not from suicide or sickness but from that one game that everybody plays: the choking game. I found out the news by telephone on VACATION. A friend of mine who was also close to him was in shock; then again I can't say that I wasn't. It was heartbreaking but I couldn't imagine what his family was going through. His younger brother and sister had no one to look up too. It broke my heart as it did for the rest that knew him.

That is my life adventure, for now at least. I have three more years to make another storybook yet another adventure awaits my arrival. This was my odyssey, now it's time to tell yours. 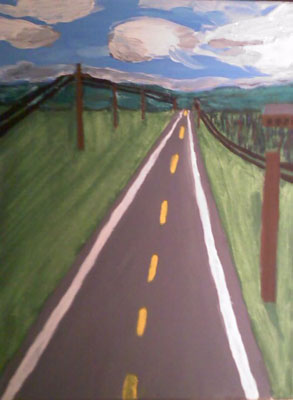