When Are You Coming Back? | Teen Ink

When Are You Coming Back? MAG

The eraser on the pencil tastes bitter, yet after years of habit, I can't stop chewing it. I sit next to my father trying to work out a math problem that must have come straight from Einstein's workbook. My eyes are lost in a sea of smeared lead. The numbers have melted into each other, and even my squinting can't separate them. Instead of trying to follow along, I look for art, like searching for figures in clouds. A mountain emerges next to the quadratic formula, the radical turns into a cliff, and a sun appears among the circles. It silhouettes the arc of a line and eclipses all the nothingness that has converted itself into numbers.

My father's shoulder-length curls have long since surrendered to gray; one side lies flat on his head, while the other sticks straight up, the result of a two-hour nap. His callused hands instinctively rest beside his guitar, and his eyes peer from above his glasses, reflecting the light as they wait for my reply. I take another look at the paper, but all I can see is the picture I've painted.

“Actually, I'm still not quite sure how you solved for x.” He sighs and once again starts explaining the problem. His rich accent is a reminder of his past in a land stained with blood and the fallacy of freedom.

The screaming of children supplements the deafening sirens. My father begins counting the seconds; the last time there were 48 between the siren and the bomb. My mother quickly snatches my 3-year-old brother as they merge into the mass of people heading for the basement. The smell of mold confirms that they are close. In the basement the silence is almost as deafening as the sirens had been. Muted prayers are interrupted with a sudden boom. My father can't help feeling relieved that it was not his family that was hit this time, until a picture of another family buried under a rubble of hate and oppression flashes before his eyes. My father waits the suggested 30 minutes before emerging from the basement into the dusty Iranian air. Debris and rubble fill the streets, but no matter where he looks, he cannot see a future for his children.

“So, by creating a 30-60-90 triangle, you can find the hypotenuse, which in this case is the height of the octagon.” As he draws the triangle, I look into his eyes. I try to remember how they looked three years ago when he first became unemployed: the anger, ­humiliation, and worry. Or how they looked two years ago when he told me he would be moving across the country for work, and that he would come home as many weekends as he could. The anticipation and loneliness they showed. Now, as my father chips away at my math problem, they sparkle, pupils dilated, completely engaged.

St. Louis, Missouri is 2,119 miles away from Seattle, Washington. That's a 34-hour drive (36 in traffic) that passes through seven states. Two days before my dad had to start work, he set out, stopping at a motel along the way. Later, when I asked about the scenery, he described the icy silence of traveling alone, accompanied by only the echo of his own heartbeat. The soft snowfall in ­Nebraska, the ominous mountains in Utah, the desolate tundra in Wyoming yearning for inhabitants – the beauty in everything hidden behind the fact that every mile was one farther from home.

“Oh, so you calculate the cosine of 15 and then divide 12 on each side to get the apothem of the octagon!”

My father smiles at me, even though it has taken 30 minutes of his patience and my persistence for me to solve this problem. To further show his satisfaction he picks up his Yamaha guitar, the polished mahogany resting beneath his arm, and plays “Malagueña.” The music dances above me. Each note flutters over my face. It draws me near as the sound swells, then quickly thrusts me back with the anger and rush of the crescendos. Once the anger has simmered, legatos bring the melancholy, and it carries me. I travel to Spain, sun-baked bricks and rhythmic dancers. My father has gone too, replaced by a ball of passion and fast fingers. Once his soul has no more to give, the song comes to a jolting end and I am back.

Some days I thought I could hear my dad strumming chords, but then I would snap back to the sound of the page turning as I read my novel. My mom would wait as long as her eyelids would let her, postponing the lonely walk down the hall to her bedroom. After the first few days she kept the TV on even when no one was watching. Unfortunately, when I asked for math help, all Anderson Cooper wanted to talk about was the oil spill. Sleep came second to my father's nightly call. With eyes heavy as an elephant, I would whisper, “I love you” into the cool receiver and mentally make note of how many days until I would see him.

“Is it six already?” Gently my father places his guitar on the carpet and checks to make sure he doesn't forget anything. When everything is accounted for, he zips up his suitcase and calls for my mother. I stay where I am and play with my pencil, the question stuck in my throat. I hear my mother's dainty footsteps as she enters the room and the jingle of keys in her hands. My father approaches me and kisses me good-bye. I cling to him as I muster up all my courage and tuck away my fears. Finally I ask: “When are you coming back?” 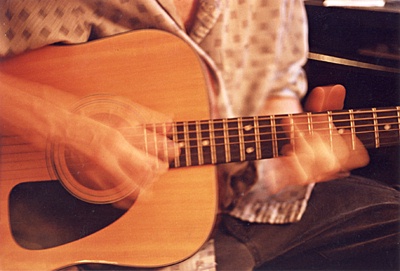