I had not given eating meat a second thought. It was just something I had always grown up doing. Hamburgers, pork chops, and chicken tenders were a part of my daily diet. I never thought that one day I would eliminate those foods from my life completely until one day.

When I was 4 or 5, I offered my babysitter, Alyssa, part of my turkey sandwich one afternoon. She politely declined and explained that she was a vegetarian.
“What is a vegetari-what?” My four-year-old self struggled with the advanced word.
“It means that you don’t eat meat.” Alyssa explained.
“So…you don’t eat chicken or hamburgers or anything like that?”
“Exactly. I only eat foods that aren’t animals.”
“But, why?!” I could not grasp the concept of not eating certain foods unless you did not like them.

I pondered this strange idea of not eating almost all of the foods that I had been eating my entire life. How could someone just suddenly stop eating certain foods? Then I began to think about all of the pigs and chickens and cows and fish that I had eaten and how their families probably missed them. It was a complicated concept that my small brain tried to understand. I struggled with it, but on one summer day on a highway, the foreign idea became real.
During a car ride to visit my grandma, when I was about nine years old, I saw something in a truck that made me change the way I thought about eating meat forever. I was sitting in the backseat enjoying the sights and sounds of the freeway when a large 18-wheeler rumbled past us. I did a double take. It looked like animals inside of the truck. I got so excited. As an animal lover, it was cool to see some animals taking a drive on the highway. I pointed at it and exclaimed with joy.

“Mom! Mom! Mom, look!”
“What is it?”
“Looks like a bunch of pigs taking a little drive on the highway! What are they doing on the highway? That’s funny. Why aren’t they on their farm?”

“They are being taken to the butcher, Henson, so they can be made into hotdogs, bacon, etcetera.”

“But, there are so many of them. They are all crammed into that truck altogether. There must be at least a hundred of them.” I felt bad for the pigs. They had no idea what was coming next. They probably thought they were going on a nice car ride, just as I had thought they were.
“It’s awful.” I furrowed my brows and my joyful feelings vanished along with the truck that sped off into the distance.

I did not know if the pigs knew what was going to happen to them, but I could not help but think about the gory aftermath that would occur soon. I could not imagine the pain that their cute, pink bodies were about to endure. And I could not even begin to think of reasons why someone would be so heartless as to murder an innocent creature. It made no sense.

In the fall of 2007, I was 10 years old. I was in my last year of elementary school and it had been over a year since I had seen those pigs on the highway. Every now and then I would think about the poor pigs that had suffered to be on my plate and I could not get images out of my head every time I saw a hotdog or a piece of bacon. I felt guilty. Then one day, my mom made me chicken tenders before my rehearsal for a musical.

“I’m not eating this.” I pushed the plate away and crossed my arms.

“What do you mean? You love chicken tenders.”
“Loved. Not anymore.”

“Why not? Do you not like the way I cooked them?” My mom started to grow upset.

“Henson, if you don’t eat meat then you won’t have any protein and you won’t be able to all of the things that you want to do like dance or sing.”

I wanted to be in the show so bad. I had worked hard to be in this production of The Wizard of Oz. I was only a munchkin, but the rehearsals were something I looked forward to every night. I wanted to stand by my refusal to eat meat, but I really wanted to go to rehearsal.

“How about I eat this now, but I don’t eat it ever again.” I was trying to come to a compromise with my mom.

“You have to eat some kind of protein.” My mom argued.

“What if I don’t eat red meat or pork and eat chicken and fish.” I knew that my mom was not going to let me go without a diet consisting of some kind of protein.

That was my first step towards vegetarianism. I knew that it would take some more convincing to get my mom to let me go without meat completely and it would not be for a few more years. Before then, however, I ran into many rough patches in my health.

Going into the 6th grade, I began to have migraines every morning. This lasted almost twelve months making my first year as a middle school student extremely difficult. I soon realized that I had to find some kind of protein that could replace the sustenance that I was not getting from the red meat and pork. I began eating more nuts and beans and more chicken and fish. Soon the headaches faded; I went back to normal. After a few years I became a full-fledged vegetarian. I discovered the magic of the wonderful grocery store, Whole Foods, which carries many products that are vegetarian and vegan friendly.

I would like to try, one day, being a vegan, but for now I am content with living a vegetarian life. I am content knowing that while I am only one person, my beliefs and morals can affect someone else and create a domino effect to help others realize that being a vegetarian has many benefits. I understand the dangerous effects of what might happen if everyone on earth stopped eating meat – such as overpopulation of cows and other animals – but if some people understood the benefits of vegetarianism, our carbon footprint would be just a little smaller. 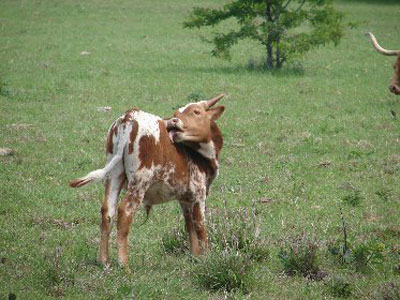 The author's comments:
I hope that people will be inspired to stand up for what they believe in. Finding something you are passionate in is rare and if you find that something, follow it to the ends of the earth faithfully.
Post a comment
Submit your own