The first time I discovered empathy was during springtime in sixth grade. It was partially cloudy and recess time. Recess took place in a large soccer field and playground behind the school. The field was reserved on mention for the fifth and sixth graders. The first melt of the season took most of the bulk from the snow so the sun was already starting to dry things up. But there were still some rivers running down the streets and patches of mud so you had to be careful where you stepped. The Minnesotan insects were just starting to wakingup and find their way to sidewalks and holes through open windows in the school building.


My friends and I had found an ant nest in which a bunch of ants were running around constructing their homes. They were black, and average size little creatures innocently building their nest. I had always been fascinated with these tiny little creatures so we spent some time watching them.

One of my friends was named Brittany, we bonded over the violin and art classes we had together. We were also some of the shortest in our class.  Brittany and I found our selves alone together, engrossed in a conversation that had something to do with her moving away. By and by our attention drifted to the topic of fires.

I then rustled in my pockets, and started pulling out stuff out of them: joke books, tissues, and really anything useful or interesting to an 11 year old. I was in search for my magnifying glass. I had super cool boyish camping style zip-off's so the pockets were big enough to hold a lot of things. Finally, I took out my magnifying glass. It's black, I got it from a camping store, being a cousin to the Swiss army knife design it was included with a foldout binoculars and a fold-in monocle in one.


I told Brittany that I could burn leaves with it and that I could teach her if she wanted. After finding some dry brown leaves (they were mostly wet) from the previous year and some baby leaves from a bush, I showed her how to angle the magnifying glass just right and how to make sure the light concentrated on the leaf was bright and tightly focused. If it were in the right position you would be able to see it smoking until there was hole right through it. After Brittany had mastered this to an extent we began the task of building a real fire, but we soon gave up since we both lacked the specific knowledge and experience of actually building a real fire. After some experimenting with what we could burn, the thought then occurred to Brittany, as a wandering thought comes in like a cloud, if we could possibly burn ants. We failed at this pretty quickly, realizing that ants were really fast. And even if they were still for long enough we could only cause tiny whitish-like sunspots on their backs. This may be an confusing image, but it's true, if you have good eyesight as well as the raw motivation for burning an ant while its walking you would be able to see slightly discoloring of the black turning into a bit of white on the ants abdomens. I guess you could call them scars or sunburns. Brittany then suggested that we smash them, so she did that, while, I, the expert burner, did the burning. It was surprisingly easy. I remember feeling a rush of heart pounding excitement. In order to get the picture of what it was like, imagine being really small, pushed around a lot, female, and shy. Now imagine someone giving you the power to dictate the lives of creatures hundreds of times smaller than yourself. That was how we felt, empowered.


"We should stop, I'm starting to feel bad," Brittany told me, starting to come to her senses. She was also the one who was physically touching and breaking the ant’s bodies with her bare fingers. I wasn't so sure, I was proud that I could do something some people couldn't and I was hungry to practice my uncultivated talents.  I did not want to give away this new-found power I had.

Brittany read my expression and my silence and added. "But maybe one more, it is fun." We continued burning the ants, this time using rocks. It wasn't until I managed to burn one alive that I understood why Brittany had said that. While it was burning, I noted the ant was sort of waving its legs about in fierce struggle to cling to life. I felt guilty then. The guilt was like fire in my stomach, I still feel the emotion whenever I recall the memory. It just flamed up all at once and I felt like I could not breathe. I felt sick. I knew we had to stop. But we didn't. It was Brittany's turn to be addicted now. Finally, I decided that I had enough, and made it clear that I did not want to do it anymore. I then walked away.

The Massacre of Flies

That was not the last time I got a taste of blood from my own making. That summer before seventh grade, in August, I was at sleep-away camp helping in the kitchen. The air was thick with horse flies and people were swatting them to keep the food safe. I asked what they were using to swat the flies since I had never seen it before and they said, "A fly swatter," and handed me one. I struggled at first, but once they showed me how I soon became obsessed with swatting flies and being the protector of good hygiene. I got good.

What stopped me this time from continuing my rampage destruction of flies was when I saw their blood. Red blood. A red mushy mess on the counter about the bodies I had broken. This was blood. This was blood looked quite similar to human blood. Not unlike the very blood which ran though my veins. I got grossed out and soon stopped after getting that horrible  queasy feeling again. I did swat some more before realizing it was hopeless to promote such violence in the kitchen when they kept on returning endlessly. I quit the bloody job. I decided I was not interested in being a murderer any longer.


World War II
That following year in seventh grade, I was again reminded of my inhumane behavior only to a greater extreme while reading Maus by Art Spiegelman. I felt horrible for the poor Jews who were killed at the hand of Hitler and the Nazi's. They must have felt like giants with all there power. I swore to myself then, that I would never again allow myself to hurt another living being much less enjoy it. Not even a mosquito....well maybe if it were biting me. The point was, we had killed not out of hate, but for power and maybe even aggression and that did not settle well with me.

That spring, in 7th grade, a year after burning ants, I found a bee stranded in my house and I felt the incentive to help it. I edged it on to a piece of paper and slowly transferred to the outdoors. It felt remarkably good to help the small, delicate creature after a year filled with guilt and blood. It was like exhaling a breath of relief.

So next time you see a child smashing ants, please, kindly tell them to refrain from this activity. Although ants far out number the human population, innocence should not experience the taste of blood. Humans have done this too much already. Value nature, treat it graciously. Kill animals for food not for sport. Love and cherish all forms of life. 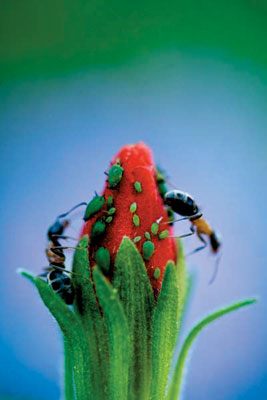