A Tube of Lip Gloss

At the age of five, I received my first tube of lip gloss, It was a clear pink gloss with a rollerball applicator. I got it at Claire’s for my birthday, my mom said that I could have it because the school year was starting soon. I thought I was cooler than all of the other girls. They all had tinted chapstick, but I had lip gloss.

At the age of seven, I received my very own tube of lipstick, It was light pink. It was only two dollars but that was a lot to me then. I mean I was used to picking up lipstick from my mom for free. We got it at Sally’s Beauty Supply, my mom was picking up some toner for a client. I still remember stumbling around the aisle in excitement to show my mom.


At the age of nine, I received my first eyeshadow set. It came in a little barbie packaging. It contained glittery lip glosses, bright pink blushes, and terribly pigmented eyeshadows. I remembering piling on blush till I looked sunburnt, with blue eyeshadow up to my eyebrows, and horrible orange lipstick. I thought I looked like a model, I was terribly wrong but still rocked the look.

At the age of eleven, I received my first tube of mascara. I was bullied. Words were harsh despite the simplicity of them. I remember the mascara that stained my cheeks when my bullies brought oceans of pain and left tsunami tides in my eyes.
“You’re fat”
“You’re ugly”
“Everyone hates you, that’s why you don’t have any friends”
“Because of you, we lost the game. Great job idiot.”

I would always say the same thing.

That was all. A simple word that to me, built walls after the numerous times I said it. Four letters were used as my pathetic attempt to block them out.


At the age of twelve, I received my first concealer and face powder. I was also allowed to wear makeup at school. I covered my blemishes and covered any imperfection possible. I tried to compare my face to the models I saw in magazines. I found a need to hide any reason to be made fun of. This was the year I was enveloped into a crowd of self-depreciation.


At the age of thirteen, I know longer loved makeup. I found comfort in my chubby cheeks and dark under eyes. I was shamed for my acne, I didn’t care, Acne was natural. I struggled with self-love and the feeling of worth. During this time I saw a change. Women with freckles, scars, bushy eyebrows, vitiligo, short hair, long hair, no hair, body hair, curvy bodies, slim bodies, thick bodies, hijabs, tattoos; and even women of color were printed in magazines or posted on the internet. It was beautiful. It was beautiful to see the media embracing differences. Covergirl even had their first cover boy, an internet star named James Charles.
“You aren’t skinny enough”
“You’re Ugly”
“You aren’t pretty enough”
My response has changed.

“Maybe you think so, I know differently”

At the age of thirteen, the world’s beauty was no longer found in a bottle of mascara or in a tube of lipgloss. Instead, I found beauty in our people, our diversity. 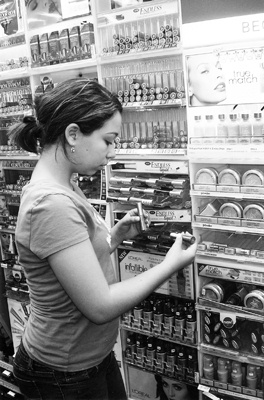 This memoir is a collage of flashbacks that led my journey of self-love.