Yeji and her family were in Norway, preparing for a 11-12 hour round-trip hike to Trolltunga, a rock protrusion nicknamed “the troll’s tongue.” They brought lots of things with them, such as water bottles, snacks, and raincoats. The brave 10-year-old was exhausted from a long climb up, as she took a swig of water and a bite from her chocolate bar. She was very tired, but she looked up only to see that she hadn’t even completed the first leg of the trip.

They kept on going, getting more and more exhausted as they climbed up, meter after meter. Yeji hiked on, not thinking about anything besides reaching the top and being able to rest and relax, stopping every few minutes to eat a bit of her chocolate bar. They reached a stream some way up the mountain and refilled their water bottles. They repeated this same thing over and over, making sure to conserve their water between streams. They didn’t have any food besides the chocolate and candy bars that they brought onto the hike.
They pushed up the mountain until it was over. 6 hours in, they had reached Trolltunga, the troll’s tongue. It wasn’t a very big protrusion, barely noticeable on the mountainside; maybe one adult could lay down on it. It was gray, small, and just looked very plain. “The troll’s tongue” definitely was a fitting name. Despite how small it was, it was still remarkable to be standing on the edge of the mountain, looking down and marveling at how small everything was beneath them.

They had experienced the beauty of Trolltunga, but it was time to head back. Yeji and her family were so tired from the climb up that they groaned at the realization that they would have to go back down for another 6 hours. They were just coming down the mountain it started raining. The ground suddenly became slippery, and the family didn’t know what to do. Sure, Yeji was brave, but she was only 10 years old. What would happen if she slipped? Luckily, they had brought raincoats and ponchos with them to keep out of the rain.

At first, they sat behind a big boulder because they thought the rain would stop, but then they saw the storm approaching them. Thunderous booms echoed through the ravine as lightning appeared before them. They ran as fast as they could, trying to get out of there before one of them got stuck in the rain or was struck by lightning. They were terrified of being alone in the rain on top of a rock protrusion, as any rational person would. They stopped for a bit to catch their breath, but started running again soon after, and this time they really ran.

The rain didn’t stop and it wouldn’t stop for a long time. They ran as fast as they could, but there was no escaping the storm. They were caught in the storm very quickly and had no choice but to keep going regardless. Yeji ran, her yellow raincoat flapping behind her. Unfortunately, her parents didn’t bring enough raincoats, so her sister had to wear a plastic bag. They kept on pushing through the storm, until they reached the bottom. Unsurprisingly, it was easier to go down than up. Yeji felt exhausted, but she had done it. She had completed a 12-hour hike to Trolltunga and back. It was done. Yeji would soon think of this as the best experience of her life. 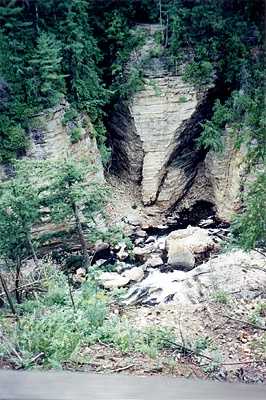