Favorite Quote:
"Never Regret Anything Because At One Time It Was Exactly What You Wanted."

All water has a perfect memory and is forever trying to get back to where it was.
~Toni Morrison

My car was still lurching forward once I removed my foot from the brake. It was pure instinct and habit that led me to reach over and put the car in park. That’s when I noticed my right arm would not move. I could not feel it at all. Panic. One simple word is how that moment can be summarized. Quickly, with my left hand, I reached awkwardly across the crushed front part of my car and pushed it into park.

I have to get out of the car.


Suddenly all my senses kicked into overdrive and my heart raced faster. Grabbing the door handle like normal I shoved against the door of my poor mustang; no movement, not a budge. I kicked, pushed, threw my aching body against the frame. Nothing. Panicking, my breaths increased and I found myself gasping for air. It was suffocating. The old air bag in my car, even though it had deployed and saved me, had busted open and the dusty gas was swirling through the enclosed space and in my hysteric state of mind I thought I was going to die.


A little less than seven months ago, in March 2012, I was driving home from my high school. I had a 1994 teal mustang, old, but it got me to where I needed to go. About 2 minutes from my house I emerged from a stop light, and driving past the tiny Lewisville Fire department, I had barely reached 35 mph; the speed limit is 45 for that area. Just ten feet from the fire station is where everything went to hell.


It was a blur. I barely had time to think about my reaction before the impact. A reckless, careless, twenty something year old pulled out of the apartment complex on the left side of the road; he attempted to cross the road completely into the apartment complex across the street. Literally, a cars length in front of me, he slowly hesitated in the middle of the road and abruptly gunned his car. Without thinking, my right hand was pressing the horn firmly and my foot was slamming the brake down as hard as I could. It was a failed effort. The cars impacted. The next thing I remember from that moment is trying to place the car in park.

What happened to those seconds? Minutes? Who knows?


Choking on the dusty air I banged on the window, screaming for help. My arm felt as if someone had taken my string of nerves and cut it at an inch interval. It was searing up my arm, and my fingers were completely numb and there was no movement. Nothing would move.


My left hand, now in a fist, pounded on the window, and I cried as I counted seven cars pass my accident without stopping, or even hesitating to stop. Finally, right on the edge of a mental break a truck screeched to a halt and two men rushed from its doors. One pried my door open enough for me to climb out; the other went to help the other driver, who I later learned had only a sprained ankle.


A woman had come across the accident quickly after I was removed from the car. She grabbed my shoulder in an immediate hug before I winced in pain.


“Are you okay?” her panic soaked voice touched my hysteric mind.

“My arm hurts…” was all I could manage for the next hour.


My mom was called, along with paramedics and the emergency response from the fire department. An ambulance whisked me away to the hospital, where after waiting and wallowing in pain I was put under anesthesia and wheeled into immediate surgery. It would have been no use to try to pop my bones back into place.


The air bag in the car had broken my wrist joint and moved it up past its place and back into my arm. The broken piece of bone was pressing against the group of nerves in my wrist/hand. I had pins in my arm for more than six weeks after, and every time it rains my arm throbs with pain. I wore a full arm splint, then a cast, then a brace for prom. Finally free of the constricting braces I still have to wear a small brace for support and pressure every so often.

Forever I will be 12° disabled in my right hand, it will never work as it used to. My wrist will never bend all the way back again, and for now it pops with certain movements, and I can’t even yank my laundry out of the washer without straining it. Forever I will be stuck in the accident, whether I want to be or not. The scars will always stare back at me. 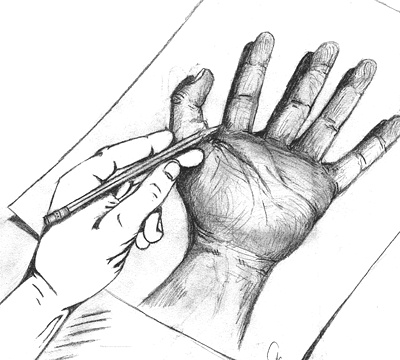