The first guitar I ever played was my uncle’s old acoustic. The strings were wound way too tight and the action was so stiff I could hardly push the strings down, but I played it every day. I learned everything from Metallica and Pantera to Led Zeppelin and Jimi Hendrix. It wasn’t easy, but I found it an endlessly interesting hobby. No one seemed to support me, but they didn’t need to. It was the first time I had found something without needing to impress anyone or because I was told to do it. It became my escape; every time I had a bad day, I just remembered I was lucky enough to own a guitar.

In tenth grade, I asked my parents for an electric guitar. They were pretty skeptical at first but decided that it would be a worthwhile investment. And so I became the owner of an inexpensive black Yamaha with great pickups and a horrible fret board. I played it from the moment I got home from school to the time I fell asleep. It was the only possession I really cared about.

The first day of junior year, my friends Kenneth and Steve approached me with the idea of starting a band. I was a little hesitant because I wasn’t sure of my ability but they asked me to come practice with them just for fun. I was really nervous because I was sure they were more advanced.

I plugged in my guitar and they told me to play something. I went through some runs to warm up and they stared at me. When we finally wound down practice, Steve asked, “Do you want to be in the band?” I had never really thought about playing in a band and didn’t even expect them to consider it, but I gladly agreed and now, nine months later, we have shows booked at a place downtown. I will never, ever forget the first time I picked up the guitar. 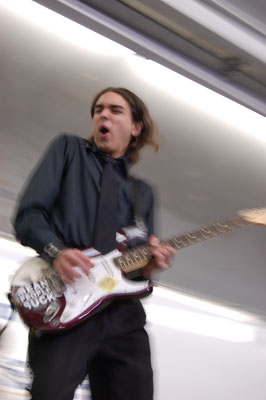 “One should guard against preaching to young people success in the customary form as the main aim in life. The most important motive for work in school and in life is pleasure in work, pleasure in its result and the knowledge of the value of the result to the community.”
Albert Einstein

View profile
"I will never, ever forget the first time I picked up the guitar. "

More importantly, I hope you never remember the last time

you picked up your guitar. Keep playing.