“Unfortunately, you were off course at the first jump,” they told me even before I’d brought Chester to a halt. Disbelieving, I looked back toward the judge’s booth. Off course? It took a few seconds for the words to sink in. Yes, I had in fact missed the first jump. Of all the classes I could have messed up, it was the Jackpot Jumpers. Money had been at stake, and it was an expensive class to enter. I felt horrible.

“Claire, honey, are you alright?” I hadn’t noticed my mom approaching.

“No, I’m not!” I snapped. “Mom, of all the courses I could have screwed up, it had to be the Jackpot! It was a stupid mistake!”

Chester began to prance. He hated standing around at shows. Annoyed, I raised my crop to give him a smack on the rump.

“Don’t take it out on him, Claire. He’s not doing anything wrong,” my mom warned. Gritting my teeth, I lowered my hand. “He knows that you’re frustrated.”

My mom shot me a warning glance and I immediately fell quiet.

“Thank you. Now, is there another class that you could do?”

Realizing that Chester was eying a nearby patch of grass, I slid off and led him over.

“Go sign up,” my mom said, taking the reins from my hands.

She was serious. I walked over to the office.

“The Jackpot Jumpers,” I replied.

“I’m going to redeem myself with the Port Madison Jumpers.”

I filled out the entry form and ran over to the course board to find Class 14.

“You alright?” my friend Kaylee asked.

“I went off course. How stupid!”

“It’s alright. It’s just a little show and besides, if you never went off course, then we would be forced to hate you.”

I nodded, seeing her point.

“Up next, number 322, Chester, ridden by Claire Nitsche.”

I heard the barn moms whoop. I tried to run through the course in my head but my thoughts were interrupted by the starting whistle.

“Alright, buddy, let’s do this,” I whispered to Chester. His ears flicked forward and back, and he began to prance. He knew this was our time to shine. Clucking him to a canter, I realized that all eyes were on us.

Just ride it nice and easy. Twenty-nine seconds is a long time, I heard my trainer’s voice in my head.

I gave my release and Chester flew over the first fence. We made the turn and cantered toward the judge’s line. I smiled as I heard his lips smacking. Jump two was fine. I looked forward and got a good look at the next fence. My heart began to race. It looked way bigger than 2'9". It was an oxer, a big, hulking, solid oxer. Don’t run from fear, jump over it. It was a saying I used a lot, and now it seemed reassuring. Chester steadied out and began to raise his head excitedly.

“Atta boy,” I muttered. I knew the jump was probably scary to him, too, but he wasn’t going to stop. He had thrown his heart over the jump already and was willing to follow it.

I felt Chester plant his feet and prepare for take off. I was met by one of my favorite sensations: I was flying. Nothing in the world could stop me now. Instead of throwing my heart over the jump, I had thrown my dreams and my accomplishments. There wasn’t a thing in the world that would keep me from my goals. I felt like I was suspended above any roadblock that I might meet along the road to my future, and I had the support of my faithful steed to get me over it.

The landing was a little rougher than I expected, but Chester caught me. As we began to canter around the corner, I looked over my shoulder. Shoot! We were about to run right past fence four. Sitting deep, I half halted Chester and whipped him around. He skidded almost to a stop but was already turning. We were slow, almost too slow. I gritted my teeth and put my heels to his sides. I wasn’t going to give up on this fence, and neither was he. Chester hopped, collected himself, and planted his front feet to spring. I wasn’t worried that he would refuse; I knew he’d go over despite the odd angle. But there was still the chance of knocking the entire fence down. It was going to be close. Crouching over his neck, I knew the round was now up to Chester.

As we walked toward the gates, I bent down to pat Chester’s shoulder.

“Thank you, boy,” I muttered. He flapped his lip in response.

“Nice round, Claire,” I heard as we left the ring. I nodded my thanks and dropped my stirrups. My legs were shaking. Chester’s head was hanging low and I knew he was tired. We had both had a long day.

After taking him for a cooling walk, I dismounted and let him eat. He lipped my shirt and tried to scratch but I pushed him off gently.

“Alright, we have the results from class number 14, Port Madison Jumpers. The course had to be completed in 29 seconds. Here is the order: in first place, number 322, Chester, ridden by Claire Nitsche.”

Chester’s ears pricked up. It was all I could do to keep from screaming.

“Come here, you dirt bag!” I exclaimed as I threw my arms around Chester’s neck. He slimed me, but I didn’t care. He had pulled through for me, and that was all that mattered. We had proven ourselves as contenders. Most importantly, he had proved himself by carrying through when I was afraid. After all, when fear rears its ugly head, there is only one thing to do: just jump it. 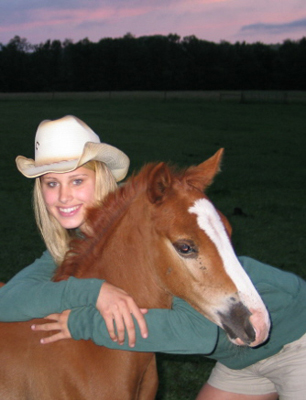