The glaring sun blazes off the pavement and the fields by the road that seems to extend forever. My legs and lungs burn with each pedal stroke. Up, down, up, down - the rhythm is all that is keeping me going. I have to keep going because it is the only way to get home.

Welcome to Tenth Gear, a Christian organization. For the past five years I’ve ridden with them for a total of 1,400 miles. We don’t stay in hotels, we don’t even sleep in beds. We find churches that will take us in for the night and sleep on their floor. Then, early each morning, we get back on our bikes, legs aching, and bike. We ride 60 to 80 miles a day, and with such a daunting task, something as small as a smile can make your day. I have never experienced human kindness more acutely than when I’m on my bike.

People bless us in a multitude of ways. During the most recent trip a pastor invited us to stay in his lakeside home with beds, which may not sound like a big deal, but after a week of sleeping on floors, a bed is pure bliss. Not only did the pastor give us a nice place to sleep, he also took us tubing, cooked us hamburgers and hot dogs, let us use his pool, and lit a bonfire so we could make s’mores. The pastor’s house was heaven. The kindnesses he showed are multiplied many timesafter a long, hard day’s ride.

On the road we are very vulnerable. We ride our little bikes next to huge 18-wheelers. I’ve almost been hit a few times, but this vulnerability is exactly what makes people help us. One time, a rider’s bike was seriously damaged and the support truck had been called, but minutes later, a mobile bike repairman happened to drive by. He saw our plight and pulled over to help, and didn’t allow us to pay. This act of kindness made our day.

The leaders map the route without actually driving it, so naturally errors are made. When this happens, some of the faster riders go ahead and wait until the last riders arrive. Once, my friend Jarrett and I were waiting along the side of a highway when a truck drove by, braked, and began backing up. Jarrett and I edged toward our bikes in case we had to make a getaway. The driver’s door opened and large boots stepped to the ground. An equally large man came around the back of the truck and approached us. Jarrett and I were ready to bolt.

“Are you kids okay?” the man asked, his voice full of concern. Jarrett and I breathed huge sighs of relief, explained what we were doing, and thanked him. He told us he just wanted to make sure we were okay, wished us luck, and drove off. That man was perhaps the one hundredth person to drive by us, but the only one who stopped.

Unfortunately, the bad side of human nature is also experienced. During the Montreal trip, we had ridden 40 miles and still had to make a massive climb up Smuggler’s Notch to reach the church. You know a climb is going to be hard when there are ski trails snaking across the face of the mountain. I started up and after a few hundred yards, my legs and back began to ache. I was hunched over the handlebars with a couple pounds of water on my back. It was exceedingly painful. About a mile into the climb, a car pulled up next to me and my friend.

“You guys having fun?” they asked. “We sure are in this car!” Riotous laughter ensued. I could barely breathe, let alone speak, so I could only look over at the car with disgust. I have no respect for people like that. It was obvious that we were struggling, so why taunt us? A few cars that passed encouraged us, but this one stands out vividly in my memory.

Another time when we were stopped at a light, a car pulled up. I was riding with the older teenagers who bring up the rear of the group. They happened to both be college-aged girls. The car was full of teenage guys who had a we-want-to-make-fun-of-somebody look.

“Hey, babe!” one of them called jeeringly. The girls looked over and then away, ignoring them.

“Ooh, spice, I like that!” The car erupted in laughter. Thankfully, the light turned green and they drove off laughing. People like that can ruin a biker’s day. Their taunts are so unnecessary. Every time that happens I just want to say, “You lazy idiots get out of the car and bike 80 miles, then come back and make fun of us.”

I’ve seen all sides of human nature experienced even more sharply on a bike. So next time you see a biker working his or her way down a road, don’t taunt, just give them a wide berth and go your way. If anything, encourage them. Just be aware that to those of us who ride on two wheels, the effects of your actions are larger than you think. 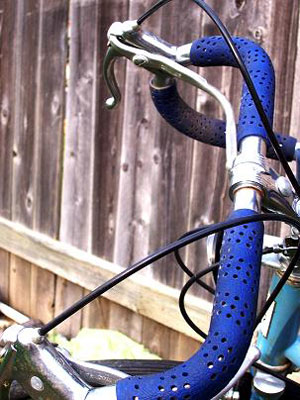