It was a sunny April afternoon. The grass was freshly cut, the trees were budding. But the only thing I could think was Don't screw up. It felt like the eyes of the coaches, players, parents and friends were all on me. This was the beginning of my varsity baseball career and I was the only sophomore.

Coach gave a speech before we took the field, but I was too nervous to listen. When he was done, we put our hands into the middle of the circle, and screamed, "South!" Then we sprinted to our positions on the field, took our hats off, and listened to the National Anthem. I also took a knee to pray. We slapped gloves and began our warm-ups. After a few minutes (which felt like an eternity), the infield met at the pitcher's mound and slapped gloves. All I can remember them saying was, "The first ball is coming to you." I just laughed out of nervousness and hoped they were wrong. We then went to our positions and I went to short stop.

The first batter stepped in and our pitcher threw a strike, then the count grew full and I had the strangest feeling that this kid was going to hit the ball right to me. When the pitcher threw the next ball, the batter hit one right up the middle. I tracked it down, scooped it up, and got the kid out at first. Everyone was screaming and shouting. It felt like we had already won the game. Everybody was so pumped up and I loved every second of it. I knew I belonged out on the grass and dirt diamond.

All the nervousness dropped from my body and I felt like I was really part of the team. Then our pitcher was ready to throw his next pitch. The batter swung and hit another ground ball in my direction. Again I scooped it up and threw the kid out at first, setting off more shouting from the fans. I was just standing there in awe. I couldn't believe how excited everyone got about every play, but little by little I began to understand what Coach had meant when he said that everything you do counts.

When the next batter came up to the plate, he too hit a ground ball to me, except this time I bobbled the ball. Regaining my focus, I picked it up and still threw the kid out at first.

When we got into the dugout, everyone congratulated me on the plays I had made. Soon my focus was on something else - I was the lead-off batter. I grabbed a helmet and a bat and began my warm-up swings. When I walked up to the plate, I felt that nervousness return. Coach had told us to take the first pitch just to get comfortable being up there. The first pitch was a strike.

The next was another strike right down the middle, and I laced a line-drive into the left-field gap. I began sprinting and picked up speed as the first-base coach waved me on to second. As I headed for second, I realized the left-fielder wasn't near the ball, so I picked up the third-base coach waving me on to third. By this time I had nothing on my mind except getting there safely. The cut-off throw was too late and I made it.

Coach slapped my hand, saying "Good job, but you're not done yet."

I knew what was coming. He gave the next batter the suicide squeeze. When the pitcher was in his wind-up, I took off and the batter laid down a perfect bunt, and I made it home! Everyone ran out of the dugout and congratulated me. That was one of the happiest days of my life. 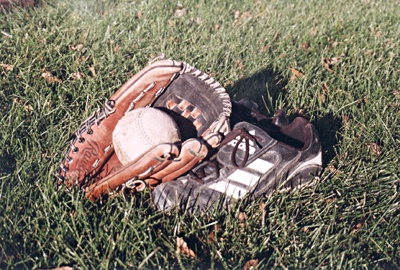