A typical mid-August day, the sun beat down on the tennis court where I was scheduled to play in my first USTA Championship match.

Nerves were starting to take control with my heart pumping at a much more rapid pace than usual. My arms and legs tingled and felt like jelly as I stood to find out when I would start.

With ten minutes until my match, I decided to warm up. Instantaneously, I felt my body respond to the excruciating heat. Beads of sweat rolled down my cheeks, and my temples pulsated. I took a few serves, putting all of my might into each one. I had to intimidate my opponent, who lazily strolled onto the court.

He had long, dirty-blond hair in a ponytail, wore a white bandanna to match his shorts and shirt and sported brilliant, baby blue shoes with white laces - Princes, the hottest, fastest, brand of shoes. I dejectedly peered at my beat-up Nikes. He was tall and powerfully built, and about three years older than me.

As he entered, the jam-packed stadium erupted into cheers and chants. He had a sense of confidence; his graceful strides suggested that he was an unstoppable tennis player. Evidently I was the underdog, and needed to prove that I would do anything in my power to conquer him.

After volleying for five minutes, we were called to the net for the coin toss. I picked heads, my lucky side. If I won, I would serve, my greatest weapon. As the referee tossed the coin, I watched. The world suddenly went into slow motion as the coin hit the ground, showing the shiny head side. My coach has always told me never to show your opponent any emotion, so with a silent cheer inside my head, I quickly stated, "I will serve to start the match."

I retreated to the baseline, looking over to the ball boy, who gave me two new tennis balls. I motioned to the line judge that I was ready, and he blew the whistle, signaling the start.

Then I realized that this was probably the most important match of my life. That terrible knot in my stomach returned, and I became short of breath. I felt like my legs were in ice water and I started to lose feeling. The court became a swirling mass of darkness.

I awoke to hear my parents yelling my name. I sat up, wet paper towels sliding off my face. I felt nervous, and unsure of what I was doing on a bench with people around me. Then I remembered my match, and my legs failing. I felt embarrassed. How could I have let my nerves overtake me?

After assuring everyone I was okay and ready to play, I was allowed back on the court. I felt surprisingly rejuvenated. My opponent re-entered with all his gear and mouthed words of discouragement. I decided that instead of getting upset, I would just play harder.

Power surged through my arms, and my racquet struck the ball with a sense of purpose. The ball jumped off my racquet and landed smack in the corner of the box, immediately skipping into the air from the heavy top spin I had put on it. His body twisted in a strange way, desperately trying to get his racquet on the ball. He failed, and the ball passed right over his head.

First, the fans gasped in disbelief. Then, the stadium exploded with cheers - for me. It was an amazing feeling to ace your opponent on the first point of the match. My confidence was stupendously boosted, and the thought entered my mind that I would actually win this match.

By the fifth set, I was in bad shape. My limbs felt as if knives were piercing them, and my legs were cramping from the intense humidity and heat. My eyes were burning from the sweat. The pain from my burning feet seared my legs up into my thighs. Every time I took a swing with my racquet, using my legs for all my power, the pain got worse. Because of the pain shooting through my body and the constant pounding of my feet, I lost the fifth set. The match would go into one of the most nerve-wracking experiences, a seven-point, fifth-set tie-breaker.

Since I served last in the fifth set, I now had to return my opponent's serve. If I lost this point, the momentum would drastically shift his way. The ref sounded the whistle.

"You may begin!" he thundered.

With a grunt, my opponent's racquet shot into the air, the ball floating softly, silently above his head. He slammed the ball into the service box with a thud. It violently surged to the right after hitting the court with spin. I leapt and swung, not knowing if my racquet even had a chance of hitting the ball. I barely hit it, but enough for it to travel over the net, along with a strong backspin. The ball landed right over the net and gave a quick hop right back at me. So much spin was put on the ball that it bounced back over onto my side, an automatic point for me. With a deafening roar of cheers, the stadium was in chaos; people were shouting my name, appreciating my effort to win.

This was only the first point, but it was enough to assure me that this was my match to win. The next two points would be my serve. Again the ball glided into the air above my head in perfect position to slam it. Sheer power electrocuted my arm as it struck the ball. He made a surprisingly good return, so I had to dive to get my racquet on the ball. As the ball traveled back onto his side, I could see the strain on his face and his pain. He tried to accelerate too fast and fell flat on his back, the ball bouncing by him. I was now up two points in the most important match of my life.

Then I gave up the next five consecutive points. I'd become cocky and thought I had won the match before I really had. When I finally realized I had to step it up, I won the next four points. It was match point. My heart was beating, my adrenaline pumping. It was his serve so I had to make a good return or else he would effortlessly smash it back out of reach of my racquet.

Different from all the other points, I knew as soon as his racquet met the ball that he was determined to win. The ball came zooming at me with the speed of a bullet. My arm shot out and the force from the ball caused a fast return. He dove onto the court to get it and the ball floated so high that it became lost in the sun. I caught sight of it flying down and my racquet connected with immense power. My overhead shot passed him and flew into the stands. An earsplitting roar of thunder rocked the stadium back and forth like a rocking chair.

As soon as my brain acknowledged what had just taken place, I jutted my arms into the air out of pure bliss. Finally, the silver trophy I was yearning for was mine. Yet again, the stadium exploded as the court flooded with fans and reporters. My parents ran toward me, looking the happiest I had ever seen them. l 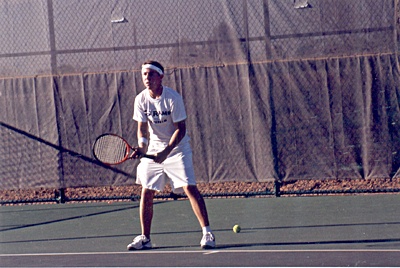