Fearpulses through my body. I look down but instantly wrench my head up again so thatI'm staring at the horizon as the lift takes me closer to my doom. I glancecautiously to my right. My father's stern features meet my terrified eyes, andunexpectedly, his face crinkles into a smile. Although still fearing for my life,my father's disposition reassures me that I may have a chance of getting off thismountain alive.

Shifting off the lift, I have trouble breathing. Not onlyis the air thin, but my courage is, too. I look around at the glittering earthfor support, but the twinkling snow offers little encouragement. As I start downthe mountain, I notice my father watching attentively.

The cold of thesteel poles penetrates my gloves. Trembling, I push off. As the freshly waxedblades guide me down the slope, I realize I have to start trusting my father more- this skiing thing is fun.

And then I fall. Despite the cold, my face isscalding with embarrassment. I roll over in an attempt to hide my red face frommy father. Maybe he won't recognize his daughter - this failure lying on herstomach in the snow.

But he does. Instead of looking at me withdisappointment, though, he turns me right-side up and laughs. Why is he laughing?I wonder. Defeated by the slope and betrayed by my own father, I cry. Stillchuckling at his little over-achiever, he explains that almost everyone fallswithin five seconds of their first attempt to ski. "Oh," I say."So, um, can you teach me how to do it, without the falling downpart?"

"Of course," he says, and lifts me up for a secondtry.

A few years later, I had grown up some - but not much. At 12 I wasfacing the biggest dilemma of my life since the fateful ski trip. Faithfully,every Saturday and Sunday, I would stand under the hot sun as the second basemanfor my first-place girls' softball team. My father, still loyal, was often on thesidelines.

As the championship game drew near, my confidence faltered.Nightmares plagued me and panic attacks became so unsettling that I approached myfather about leaving for a vacation a week early, or maybe just quitting the teamaltogether. My dad's response was all too familiar from our ski trip - helaughed. I knew he was laughing at my pessimism but, as history is doomed torepeat itself, I didn't care.

Again, I was scared. Then, I received a newlook I would see many times, which at that point was completely alien to me - wewere speaking not as adult and child, but as adults.

"Throughoutyour life, you're going to be faced with many situations that will invite you touse your own storage of courage," he began. "And although I'll give youadvice, no matter how much I believe in you, I can't force you to believe inyourself. That's your job," he smiled. Like that day so many years before,my father's words had enough power to give me faith in myself. Knowing he thoughtI'd do okay made me believe it too. After all, my dad was always right. I stuckwith my team and we won the title - I was a champion.

Throughout my life,my father has had the ability to make me give myself the strength to be the bestI can be. Although I no longer play softball, just glancing at the two-foottrophy on my desk reminds me I can accomplish almost anything. None of thesethings, and many others, would have been possible without the help andencouragement of my loving father, who continues to influence me in ways I don'teven think he realizes. 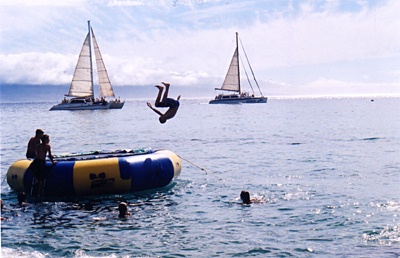