Duluth, Minnesota, is a crowded city. Its buildings tower above the dirty streets, dwarfing the taxis and buses. Some streets slant so sharply that, tilted toward the narrow streak of sky, it feels like the car is an airplane about to lift off from the runway. All the buildings are grimy and worn, dripping with huge, bulbous spiders. The spiders love the skyways especially, clinging to the glass walls and wrapping them in webs so that pedestrians have to walk through a tunnel of spiders. The entire city cries for a cleansing rain, but it gets only a thick fog that swallows the tops of buildings and gnaws at the pavement.

Duluth spills right up against Lake Superior. The buildings cling to the shore, defying the ever-present swish of the cold waters. The hills behind the city strive to push it into the water, sandwiching the town between their imposing green slopes and the wide expanse of blue-gray.

The boardwalk is the only area not imposed upon by towering skyscrapers. The pressure of tourism keeps the sky open there so visitors can stand and gape at the expanse of sky and water. The noise of the crowd clashes with the water. They are at war, fighting for dominance. The water slaps coldly at the docks, grumbling its icy defiance. The people retaliate. They talk loudly, trying to drown out the water. They throw garbage in the water and it floats forever with the dead fish.

Posters flap in the incessant wind, boasting: “Tall Ships Festival – this week only! See magnificent recreations of a bygone era!”

I leave the city behind. The pollution-filled skies don't notice as I drive out from under their shadow. Trees flash by the windows: pines, green and sturdy, branches reaching out between their neighbor's trunks. Once in a while, they part, revealing glimpses of rocky shore and unbroken gray-blue water. I pull over at one such gap. The rocks under me are sturdy, solid, and gray, anchored by the weight of ages. The waves wash ashore, filling the air with a fine spray. Fog dances on the water, a blanket to hide the horizon.

A speck emerges from the fog. It rides the waves, slowly growing closer. Another car arrives at the beach. More people get out and stand like sentries, watching the speck grow. It adopts a shape – a rounded hull anchored to taut, rectangular sails. The ship sails closer, white canvas snapping in the brisk lake wind. There! Another speck, evolving into a low, angular Chinese junk. And across the lake – this one smaller, black sails cutting through the fog. Another ship skirts the shoreline, emerging from the haze carried by huge, triangular sails. The beach is scattered with people. We stare as, one by one, nine ships appear. We are stunned, struck silent by the sight.

The ships float on the wind, maneuvering gracefully, weaving in and out as the water cradles their wooden hulls. The ships are silent. No motors roar across the water, no fog horns wail. No smoke spews into the sky. It is as if the lake has been plunged into the past, and the ghosts of ships long rotted away have come back to sail the waters one last time. The people on shore stand and watch. We feel different. We feel alive, the grandeur and majesty of the ships rolling across the water enveloping us. We will go back to our busy lives, but for now we hold our breath and simply watch. 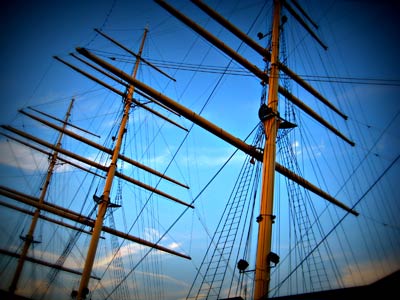 View profile
This is simply amazing. Your words make a clear image and picture to think about. Great, great job! Please keep writing! Oh, and by the way this deserves much more then just three comments!!!! :)
DreamingOutQuiet SILVER said...
on May. 27 2012 at 6:13 pm
DreamingOutQuiet SILVER, Round Rock, Texas
7 articles 0 photos 78 comments

Favorite Quote:
"Time and the bell have buried the day,
The black cloud carries the sun away" - Elliot

View profile
This was very well-written. I especially liked how you described the feeling of having a different perspective after seeing the ships. It was also interesting to me, as I have been there to see the Tall Ships Festival as well.