A few days after September 11, 2001, Clear Channel Communications, Inc. released a memo to its radio stations of 150 "lyrically questionable" songs not to be played. You need to know that Clear Channel owns or operates 1,165 radio stations in the U.S. and owns stations in 247 of the nation's 250 largest radio markets to understand how devastating it would be for an artist if this one company decided not to play his or her song.

The songs Clear Channel effectively banned are quite well-known, and some are not controversial at all. Is it really reasonable to say that "Morning Has Broken" by Cat Stevens is a "questionable" song? The fact is that when a monopoly on music distribution exists and the government favors ridiculously big business, it doesn't matter if the top guys in that monopoly are biased to the point of nuttiness - nobody can hear you scream. Certainly nobody could hear Zack de la Rocha scream in his Rage Against the Machine songs, because Clear Channel banned every single one of them.

An uproar ensued among the more informed music-lovers, but this story never hit mainstream news; all the reporters were busy following up on the terror attacks of September 11. If I had not become interested in Clear Channel after hearing on ABC News about its ineptness in Minot, North Dakota, I would never have known, either.

A few days after issuing its now infamous memo, Clear Channel backed down and claimed it was up to the local channels what they would (or would not) play. However, that is equivalent to a boss ordering you to work on Saturday and later saying that he's only "strongly suggesting" that you do so. The big guy is always in charge, and the only way to keep him from having too much power is to have multiple big guys in charge of multiple companies. There must be competition (we are a capitalistic society, aren't we?) so that the businesses will be forced to push themselves past their competitors.

MTV Networks is owned by Viacom, which also owns Nickelodeon, Noggin, CBS and Blockbuster Inc. One may say, "Wait, isn't VH1 a competitor?" The sad fact is that, no, VH1 is owned by MTV. MTV owns over 10 channels. Its only competitor worth mentioning is FUSE, Channel 226, which isn't even included in basic cable. One will find that the virtual monopoly of television music hardly plays music on its main channel! If you go to your television right now and turn to MTV, you'll probably see an IQ-slashing show like "Punk'd," "Just Married" or "The Real World."

Our complaints cannot be heard by MTV because they cater to what they believe the public wants. Record companies constantly bribe MTV and Clear Channel to play their artists' songs. MTV and Clear Channel accept those bribes, because a monopoly can and will do essentially whatever it pleases, as long as it gets as much money as possible. With just the richest record companies getting their artists publicized, emerging bands fade out, leaving music the same and dull.

What should we do? The solution lies in the problem. Part of the problem is that the government supports absurdly large business. So, the solution is government funding aspiring businesses to compete with MTV Networks and Clear Channel. After all, the government has the final say. If there is funding for aspiring businesses, they will succeed, and then create competition in the music distribution industry - and they will search for the brightest stars to showcase. That is the beauty of competition, one of the basic principles of capitalism: one company balances out the other. One company can devote itself to hip-hop while another delves into rock. Each company finds its identity and then sells itself to the public. 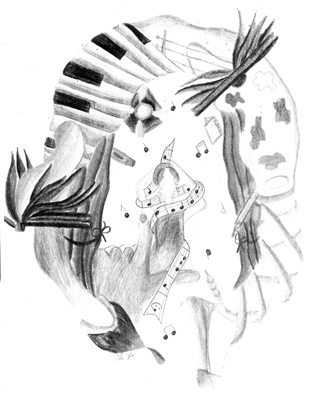