Ugly. Insensitive.Unimaginative. Overcrowded. The six concept plans for the World Trade Center sitewere met with extreme criticism from the American public. Too little commercialspace. Too much commercial space. The debate rages on. But why, when the solutionis so obvious? The best memorial is to make things just the way they were, right?The twin towers were an American symbol, right? So why don't we rebuild thetowers just as they were? Why do the victims' families insist on keeping the twintowers buried, when rebuilding is an appropriate course of action?

SriLanka, 1996. A suicide bomber rams an explosives-laden truck into the Sri LankanCentral Bank, nearly destroying the nearby World Trade Center towers, eachstanding 40 stories high. Three days after the towers are repaired and reopened,a truck packed with 890 pounds of explosives detonates almost directly under theWest Tower, demolishing a large section of the building along with part of theEast Tower and two hotels. Does that faze the Sri Lankans? No. They rebuilteverything exactly as it was, knowing full well the towers were targets ofterrorists. Today, the buildings are still occupied.

The Pentagon isanother example of rebuilding. Obviously the building is a target, based on whathappened September 11, but it was rebuilt without debate and its occupants havemoved back in. That too is hallowed ground, a place where more than 100 peoplewere killed, but it doesn't seem to bother anyone. So why not rebuild at GroundZero?

There actually seem to be more reasons to rebuild than not to. Forstarters, the foundations of the 1,368-foot titans still exist. They weredesigned especially for the World Trade Center towers, so why not make the jobeasier and less expensive by rebuilding directly on them? Rebuilding the complexcould restore 100,000 jobs to Lower Manhattan, but that's just scratching thesurface. Tourism revenues will also make a comeback when visitors flock to theobservation decks and purchase tickets, food, souvenirs and other merchandise.The Port Authority says that approximately 150,000 tourists visited the WorldTrade Center's observation decks each day, paying nine dollars each plus tax.Taxes from those tickets alone amounted to 40 million dollars every year. TheCity of New York would love to see those dollars again.

But, you argue,the towers would be perfect targets for another attack. No kidding. Well, in thatcase, let's just play it safe and tear down Chicago's 1,450-foot Sears Tower, its1,136-foot Aon Center, its 1,127-foot Hancock Center, and its 1,007-foot AT&TCorporate Center. Let's bring down New York's 1,250-foot Empire State Building,along with its 1,046-foot Chrysler Building and, while we're at it, let'sdemolish Los Angeles' 1,018-foot Library Tower. All those buildings are potentialtargets. And actually, come to think of it, we should probably tear down majorgovernment buildings - the Capitol, the White House, CIA and FBI headquartersand the Pentagon. Sound ridiculous? When all buildings are at risk, there is nopoint in building smaller buildings and using the excuse that larger buildingswould be targets. Let's not stoop to something so absurd.

So let'srebuild, America, and show the world what we're made of. Our steel is strong, ourspirit steady, and we can either run from danger and leave a national icon aspieces in a museum, or we can face the enemy and restore our symbols of power,strength and resolve. We are courageous and bold. No one should be able to snatchthat from us. 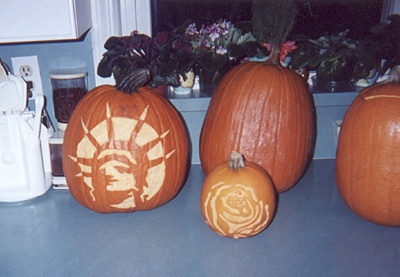