Footstepsreverberate in chilly, dimly lit hallways. Students passing noisily betweenclasses are few; teachers are even fewer. The library closed long ago due to thelack of new books and contemporary encyclopedias. Textbooks are worn andoutdated. The only thing alive and growing is the presence of state-mandatedtesting.

No, this is not the Armageddon as envisioned by religiousleaders, but our public school systems. Although it may seem unbelievable, such ascenario may not be far away if school vouchers are introduced into publiceducation.

For those unfamiliar with the concept, the system of schoolvouchers dictates any school that does not measure up to rigid state standardswill promptly have its funding taken away. This money will be given to parents,who will then have the ability to make educational decisions for theirchildren.

The very concept of school vouchers contradicts what our countrywas built on. Our public education system was originally established so thatevery student would be guaranteed the right to an education. School voucherswould undermine this right by taking away the only funding our public schoolsystems are ever given and therefore destroying them completely.

ManyRepublicans, however (and even some Democrats), argue that school vouchers wouldbe the only way to salvage floundering public school systems. After all, theysay, schools will be sure to improve if they are threatened with losing bothstudents and federal funding. But how, may I ask, are failing schools expected tochange if they are given no additional federal or state funding with which tohire more teachers, buy more computers or purchase textbooks? Are these magicalchanges supposed to come out of thin air? According to George W. Bush's plan ofaction, schools would be rewarded with $500 million only after they improvedgeneral student performance. But how will that help in the initial struggle toimprove education?

The idea of free education for all would be furtherundermined by the fact that vouchers fall far short of paying for an entireprivate school education. Therefore, while upper- or middle-class families couldpossibly combine these vouchers with their own funds to send their children toprivate schools, lower-class families would be unable to do anything of the sort.Instead, they would be forced to continue sending their children to publicschools deprived of funding and therefore frighteninglyinadequate.

Vouchers could also possibly signal the end of the FirstAmendment right to separation of church and state. Under the voucher system,federal funding could be used to send children to religious schools, as Bushopenly admitted during the Presidential debate at the University ofMassachusetts.

I contest the standards by which schools would be judged.As is the norm among many plans of action taken by the government, school systemswould not be evaluated individually so that each school's strengths andweaknesses could be balanced against others. Instead, state-mandated tests wouldbe administered to make sure schools are upholding the state's curriculum. Afterall, we don't want to have individual, well-rounded students who have been taughtto think for themselves entering our country's universities. Innovation in bothteaching and individual thought should be completely banned, according to ourvaliant leaders. Therefore, under the school voucher system, any school thatturns out cookie-cutter students would be well-rewarded, while schools with moreliberal (as good, if not better) teaching policies could have their fundingyanked.

All things considered, I find absolutely no benefits to theproposed school voucher system. As Sandra Feldman, President of the AmericanFederation of Teachers, said, "Vouchers do not mean reform - no matter whatname you give them. What they do mean is a radical abandonment of public schoolsand public education." 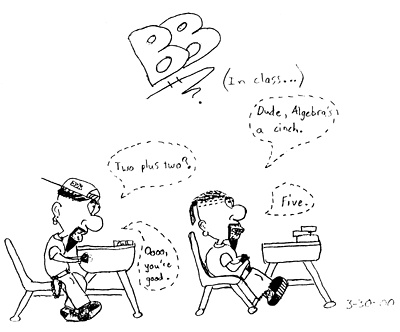