Favorite Quote:
If, with the literate, I am
Impelled to try an epigram,
I never seek to take the credit;
We all assume that Oscar said it.
--Dorothy Parker, referring to Oscar Wilde

My perception distorts all I see and none but what questioned can experience itself in its entirety.

I don't remember the last time I dealt a sentence so...coldly. Minus the forced self-doubt so I don't have to catch any criticism off-guard. Always ready. Anyway, back to topic.
Reality is a concept so incredibly relative that even when we try to imagine a situation completely removed from us beings...we don't get a completely independent system, since we imagined it. This is analogous to games like Age of the Empires. Have you ever played anything like that? Where certain parts of your world are pitch black 'cos you've never been there?

I suppose that's how the whole universe would be in the absence of beings with the ability to direct themselves. A giant question mark, where things could or could not be. And the second you start questioning the existence of the constituents of such a universe, or even just consider such a place, you bring yourself into the equation and *poof* there goes your solitary universe.

There is some beauty in the idea of the sound of the tree falling existing in relation to its perception. If no one's around to hear it, it is as real as anything else that may or may not be. See, the fact that the tree fell has been established only because the asker of the question perceived it to be so.

Moving on--the only way we comprehend a situation wholly (try to) is through projection, and that in itself is somewhat troublesome. There isn't an absolute, but an average. Perception of an absolute filters out all that we are yet to grow into knowing...leaving a handful of tainted pixels behind. You behold an incomplete picture, letting experience color what there is and fill in the blanks that remain. So you see what you want to see. And the average is thus what is,with a concentrated dye of mass perception--i.e., the sum of people's lives and how they see things. So you never really get the whole picture, but a rough idea of what it may be. This created truth overrides the actual (if there is any) and becomes the new, ever-alterable absolute that you take partially on faith. With the idea of all that there is, in the subdued flux that it seems to exist in, I can't help but feel like we live within an enclosure of blank translucent canvas. Imagine gateway sheets covering all that is. Cold facts. And us humans trying to trace over the lines. Sometimes coloring outside them, sometimes being spot on and other times creating something almost completely different eclipsing whatever is. These...images, these ideas are what we see. What we create. What we live within. It is so, so beautiful to know that we make our reality. Scary, at times--knowing that your world as you know is so delicate. So easy to destroy. But-but you can build it again. Like a phoenix, my life is. With every new day painting a new reality over what has been--sometimes defining it, sometimes erasing it and bringing in something completely new.

For all I know, an observable entity is a non-existent quantity unless proven otherwise. And when observed, all there is is what we make it to be.


Oh qualia, how exquisite you are. 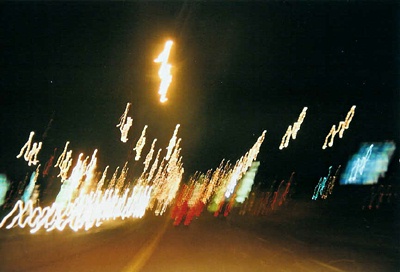