In the post-Cold War era into which I was born, security and peace seemed to reign. There were not any major problems in Bergen County, New Jersey, my only experience in the world. I was not alone in my ignorance. After the Cold War, the prosperity and seemingly peaceful world climate helped to cultivate a naive American view of the world. It seemed to me, and many Americans, that war was no longer a likelihood. I thought humanity had finally grown beyond such things, and that problems could be solved without the bestial ferocity of war. Obviously, I was wrong. This idea of peace and progress fell with the World Trade Center. War was revived in the deaths of our soldiers in Afghanistan and Iraq. Suddenly my eyes were open to the instability and conflict that existed all over the world. This made me ponder the reasons for war in the past and present and the apparent inhumanity of humanity.

In the matter of terrorism, a common misconception is that all terrorists are Arab. There have certainly been many acts committed by Arab terrorists, but this is not the definition of a terrorist. Terrorism is engaging in a cloak-and-dagger type of war, ranging from attacking political targets to attacking the population to inspire fear and make a point. The Iraqi insurgency can perhaps be compared to America’s own revolution, when patriots fired at British soldiers from behind stone walls and trees. There is, however, an important moral difference in that the American revolutionaries, for the most part, targeted the actual military and not civilians. The Irish Republican Army also employed terrorism against the more powerful United Kingdom.

Terrorism can be considered the combat style of choice for the weak to attack the strong. It may be seen as unorthodox and immoral but is a powerful strategy for weaker nations. If they know they will be obliterated using conventional warfare, there is no incentive to do that. Terrorism is thus a more effective strategy for a weak group who does not want to face the military might of a country like America. Terrorism is a safer style of warfare, affecting political targets or the general populous, thus making a stronger and more exaggerated point. The terrorists of Palestine, for example, understand that they would lose a conventional war against Israel. This is not to say that suicide bombers are brilliant tacticians, but their leaders are brilliant logicians capitalizing on a hatred toward the West and on the incredible faith and subservience of devout conservatives. Yes, I am calling them brilliant, but their choice to kill noncombatants is an act of inhumanity and immorality.

Here I will draw a parallel to another leader, Adolph Hitler. The name makes most cringe; he was the most horrible murderer, but also one of the greatest tacticians, in history. He took a defeated nation in the throes of economic death and almost conquered Europe. That brilliance is buried beneath his utterly inhuman and immoral attempt to exterminate the Jewish people and other groups he deemed imperfect.

It is often thought that terrorism in the Middle East is a product of the culture, and the bitterness felt by extremists is an irreconcilable difference. Another parallel would be the Japanese in World War II. Japanese culture seemed utterly foreign to Americans; it was considered a culture of ruthless people loyal to the degree of sacrificing their own lives for their emperor. Their use of suicide pilots, called kamikazes, is similar to the suicide bombers of today. At the time I am sure that no one thought the differences between the two societies were reconcilable, but now Japan and the U.S. are very friendly due to mutual economic understanding, agreements and other shared values.

Thus, I believe there is similar hope for reconciliation between the countries and cultures in the Middle East. I feel strongly that cultures seemingly at opposite ends of political, religious, and cultural spectra can find a way to solve their differences. Americans, American leaders and the citizens of those countries and their leaders must work harder to understand the problems of foreign cultures and be more willing to utilize our strengths and advantages to help others solve their internal problems and issues with their perceived enemies. Hopefully we can all learn to make war - and especially terrorism - a thing of the past. This would make the security and peace America perceived when I was a child a wonderful truth. 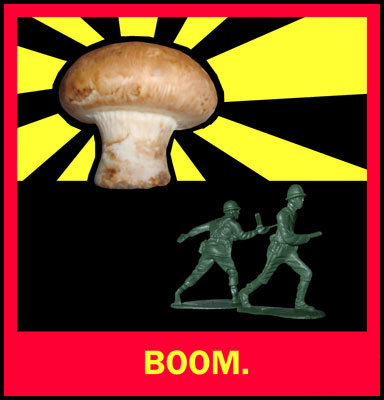