July 4th, 1776, fifty-six men signed the Declaration of Independence- the document that started our country. In it are a list of ideas stating what we thought were crucial to a strong citizen-run government and why we believed these were crucial. The people of America wanted their rights- life, liberty, and the pursuit of happiness, and from these rights the American Dream was created- the original one, that is. But as the years have gone by, we have altered this dream to what, at the moment, seems most necessary, and in the end losing the true core of our country’s existence- the American Dream.

In the beginning, the Dream was very simple: Every man has rights that our government must give to each citizen, and that every man is made equal in God’s sight.

But of course, there were holes to our acceptance of all mankind. Women were not allowed to vote until 1920, and African Americans weren’t officially written in the Constitution as legal voters until 1870 and weren’t allowed to vote without strong prejudice and discrimination until the latter part of the 1960’s. But despite these flaws, equality was the belief, and our country has fought to uphold this in not only our country but in others… a fight to spread the American Dream.

October 29, 1929, US stock markets crash, leaving thousands without jobs or money. This is the Great Depression- the age of poverty and one of the darkest times in our history. This is the turning point. In the middle of this ten year span, Franklin D. Roosevelt came into office with his own ideas of how to “fix” this economic downturn. The New Deal- that was his idea. In a nutshell the idea was considered to be the three R’s: Relief. Reform. Recovery. Relief dealt with helping those who were in a financial slump, giving them an extra financial boost. Reform was the changes Roosevelt made to the federal economy, increasing its power over the businesses in our country. Recovery was the hopeful outcome. Many people argue this is what saved us from ultimate destruction, but what really saved us was the upcoming event, World War II, that would open up thousands of jobs for struggling families. In reality all this plan did was evolve welfare, a more Socialistic style of government, and all-encompassing, the change in our Dream.

The Dream stemmed from the knowledge that all men are created equal, not that all men are equal, and over the years, this idea has been altered to what we as the American people believe we need. See, the great thing about our country isn’t that the government helps people rise from poverty or rough situations, but that, through the freedoms that we receive, are able to rise. With welfare to those who are needy, not only does it increase national debt, but also it allows a complacent attitude that it doesn’t matter how hard you work, because in the end, the government will take care of you.

Healthcare and the increase in welfare in the past year have pointed to this Roosevelt kind of view. With government run healthcare, we no longer have independent medication, treatment, or visits. The government decides if we really need that pill or if we really need that surgery… because in the abstract, they’re paying for it. With welfare increasing, those who have risen to the top of our economic class will become more middle class with high taxes in order to pay for those who work for minimum wage to nothing at all. We as Americans have the right to rise to the top, the right to become successful. Is it right that we should be punished for it?

And with this Socialistic movement coming towards us in the wake of yet another economic downturn, our government has turned completely away from what our country was so strongly built for. True, America needs help now; we are in a nightmarish economy. But once you start giving as a government, the people will only expect more and more and more, and how much higher will the taxes go then to pay for what you think the government is made to give you? The government is not a charity or a bank or a financial outlet, but something to create order out of chaos. And with this New Deal kind of view beginning to erase our federalist economy, how will we keep the dream? And in the end, will it create only more havoc?

Unfortunately, our current country has turned from the Dream of our forefathers, the one that made this country so great; events, tragedies, and hardships have turned us away from what we once were. And as we venture farther and farther away, we must all hope that someday we can get back to what we were. 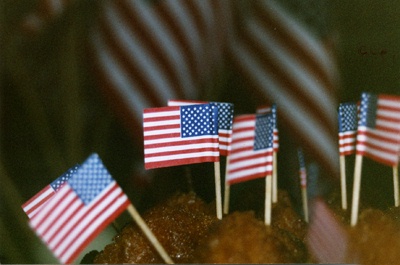 The author's comments:
This is actually a speech I gave for my English class, so the style isn't exactly journalistic and it's a little drawn out. But I would like for you to post your comments and opinions on this subject.
Post a comment
Submit your own

Favorite Quote:
Grief is the price we pay for love -- Queen Elizabeth ll
Don't go there, I'll only follow -- ???
Why is a raven like a writing desk? -- The Mad Hatter from Alice in Wonderland
Chewing gum is really gross, chewing gum I hate the most -- Willy W.

View profile
This is awesome! i so agree. I am a Republican so far as I have thought about it. I have had many arguments with my friends over stuff like this!! I AM a Republican, however, I think that when we reach the time that when technology has become so great that very few people are actually needed to work, we will move to Socialism and then to Communism, however that is rrrrreally far down the road. Again, your thoughtfulness astounds me.
sleeplessdreamer PLATINUM said...
on Apr. 22 2010 at 7:56 pm
sleeplessdreamer PLATINUM, Raleigh, North Carolina
30 articles 0 photos 332 comments

View profile
Thanks for all the comments on my work! I really appreciate it... and yes, I am a very conservative republican.
emilyjoe DIAMOND said...
on Apr. 22 2010 at 10:16 am
emilyjoe DIAMOND, Algonquin, Illinois
51 articles 6 photos 34 comments

Favorite Quote:
"What if the person in the puddle is real, and you're just a reflection?" -Calvin & Hobbes

View profile
i'm not even kidding, this is my exact oppinion. i have said some of these exact words to people my age who just don't understand. i'm interested, are you a democrat or republican? because through this i definantly got the feel that you lean more conservatively. next to writing, politics are my life! we have a lot in common. but then again, people that are able to write, who truly have the gift, they tend to think things through a little bit more, and to actually pay attention to the world around them. that is a valuable trait in any person. i admire that about you. you're an extraordinary writer, and i hope someday you choose to pursue a career in writing or something political. this is exceptional work. i hope you got a good grade (: