Favorite Quote:
And by the way, everything in life is writable about if you have the outgoing guts to do it, and the imagination to improvise. The worst enemy to creativity is self-doubt. ~Sylvia Plath

For everything we know about God's Word is summed up in a single sentence: Love others as you love yourself. That's an act of true freedom. If you bite and ravage each other, watch out—in no time at all you will be annihilating each other, and where will your precious freedom be then." –Galatians 5:14


During this passage Paul was speaking to the churches of Galatia, many of which Paul himself founded. Many scholars agree Paul wrote this book to counteract the church’s acts of forcing Gentiles to become Jewish before they could become Christian. However, Paul’s message rings loud and clear in any situation, including today’s struggle with homosexuality: We as Christians need to love our neighbors for whom they are.

Going a bit farther back with New Testament reading you find verses in Matthew that talk about loving your enemy. Verses 38-48 all speak of loving those who persecute you. However, verse 48 rings loud and clear:
"In a word, what I'm saying is, grow up. You're kingdom subjects. Now live like it. Live out your God-created identity. Live generously and graciously toward others, the way God lives toward you."

We as Christians need to grow up and show the world the love that God gave for us. We are never going to win over a homosexual for Christ if all we do is condemn them. We are children of a most gracious God, one who has shown us mercy over and over again. Yet all we do is sit around and tell the homosexuals they are going to hell for how they believe they are born to be. This would be like God telling us we’re going to hell for the lie we told when we were younger. We are forgiven. We need to act as such.

Many Christians will argue that we need to scare these people into believing that what they are doing is wrong. This seems to go back to the “fire-and-brimstone” sermons of Jonathan Edwards. Though many people were saved during these sermons, you need to step back and ask yourself if they truly believed in God or were just trying to save their soul in that moment. If someone was telling you that you were going to hell for how you were acting, you would “get saved” during that instant. The same goes for changing the lives of homosexuals. We can change them within a brief period of time by performing hate crimes, but are we really changing their lives?

I believe my friend, Mr. Jeffree Tyler, says how any homosexual individual living in the United States feels.

Well as a gay individual, I am usually shunned by Christians. They figure out my sexual orientation and condemn me to hell automatically and say that I'm worthless. Honestly I feel as if gay individuals should be treated the same as any other person of any other faith.

What homosexuals want, and need, is to be treated as if they are human. Beneath the strong facades they put on they are just like you and I. They hurt the same way we do. If we cut them, they still bleed. Just because they chose to be with someone of the same sex doesn’t make them any less of a person.

Biblical verses and personal accounts can only go so far. There are people who do not believe every word found within the Bible, nor do they want to listen to the words of a homosexual. In this case statistics will speak.

From a psychological standpoint, Christianity has always been one of the less-accepting religions. Nearly 40% of professed Christians are homophobic. Homosexuals from Christian backgrounds feel trapped. They have been raised that what they are doing is wrong. Feeling no other option, an estimated 496 suicides a year are indirectly caused by Christian churches. This statistic being said, homosexuals are 25 times more likely to commit suicide than an average person.

It is even more frightening to consider that gays and lesbians are 100 times more likely to be murdered. In many cases, this is done at the hands of another homosexual. However, if you take into account the fact that Jesus says just thinking evil thoughts towards someone is considered murder, then many Christians are to blame. Many religious people are also to blame for homosexuals trying to cover up the fact that they are gay by killing someone else in a lover spat or in order to try and conceal their true feelings.

In short, homosexuals are humans just as we are. We do not like to be told we’re going to hell for what we believe, nor do we appreciate other people judging us. Christians need to listen to the words of biblical figures. We need to love the sinner while hating the sin. After all, when it comes down to it, only God has the power to judge us. 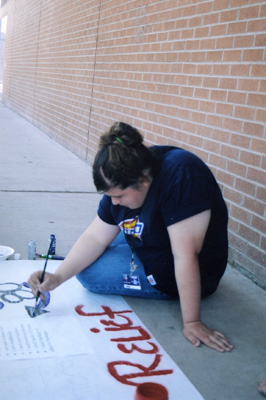 The author's comments:
My best friend is homosexual. I wrote this piece in response to my Chrstians friends actions to him.
Post a comment
Submit your own

Favorite Quote:
I hope to change someones life one word at a time. Hopefully, it's a positive change and it's for the better, but any change at all is a step to an amazing new future.