A Different Kind of Hate

I've become a victim of a different kind of hate. I'll bet it's seldom spoken of. Most may not realize the harm just as I didn't at first. It sounds meaningless and it might as well be a joke to most. At first I almost went along with it, little did I know the words were burning a hole in my heart.

I am a left-handed girl. Now, "what are you whining about?" people may say. I sound silly as I speak, but words have gotten to me, I've felt low just for holding a pencil on the opposite hand as everyone else. I've had friends whom have have said that left-handed people will go to Hell. That the Devil likes left-handed people. I am no Devil-Worshipper and I don't believe that the fact that I can't use a gel-ink pen because when I write I drag the ink means that when it comes to my judgement day, I will be sent to Hell with those who have committed murder, rape, and other unthinkable, immoral acts.

I am fifteen going on sixteen and my father still refuses to believe that I am actually left-handed. He believes that I do it as to "rebel", to be "different", he thinks it's a choice, that you learn to be more accessible with a certain hand from a young age, all words which are false. My younger brother once held an item with his left-hand when he was only a year old and my grandfather kept taking it away and putting it on his right hand. I found it odd, considering at the time he had an easier time with the left, so I encouraged him. Boy, was that a mistake. My grandfather yelled at me and once again, switched my brother's object from the left hand to the right. I cried myself to sleep that night, I stopped to think if maybe I was a mistake. Was my family disappointed in me for reaching for objects with the "wrong hand"? That question remains unanswered in my subconscious.

"Jesus sits on God's right side", the Catholic Church decided centuries ago that left-handed people were servants of the Devil. Those who attended Catholic schools were forced to learn to write with their right. This was, until researchers found that the cause of being left-handed was something one was born with, not a choice. But the church always has to find something sinful on anyone who's "different" than themselves. "I have two left-feet." While this may just be a mere saying, it hurts. It is said a left-handed shake is thought to be disrespectful, that right is the correct way. The left side of anything has been frowned upon in many countries and cultures throughout history.

Now, there are also some positive stereotypes said about left-handed people. Things such as that they make better Tennis and Baseball players, that they are considerably more intellectual, and in some tribes, that they possessed special spiritual abilities like magic and healing. In Tantras Buddhism, the left hand represents wisdom. Yet, I am not exceptional in any sports and if anything, I am intimidated by the intelligence of my peers, especially my close friends. I have no talent nor superior intelligence, so what am I? Was I a mistake even to my own people? This question also remains buried in my subconscious.


Society has created many tools and rules that are more efficient for right handed people. You might find it dumb, but simple things as scissors are more accessible for right handed people, computer mouses, watches, and so forth. I prefer using my laptop because it doesn't have a mouse, so it's easier for me to play around on the computer with the little pad. So yes, some words have gotten to me, they've made me feel low, discriminated, like an outcast. Some of my closest friends have sometimes stared at me and then asked, "How are you able to do that with your left?" in such an astonished matter I could've sworn I was levitating right before their eyes. I'd simply smile back and ask, "how are you able to do it with your right?"

I'm proud of the hand I use answer the phone with, I love positioning myself on the opposite side when I'm up to bat during a Softball ball game, where everyone can see and many have pointed out, "wow, she's a leftie", just as I love spotting left-handed people of the opposite team and calling them "my people". I enjoy being a minority, being part of something most people will never be, to do something most others can't. I suppose I really am different in that matter, but I couldn't be gladder. I look around and everyone's right-handed, right-handed look around and everyone's the same as them. Lefties are the ones who truly leave an impact on people, for the scarcity of them around the world.

Here's a little secret I bet will sound surprising to many of you. I myself am as fascinated by right handed people and their way of handling tools as they are of myself and my way of handling them. 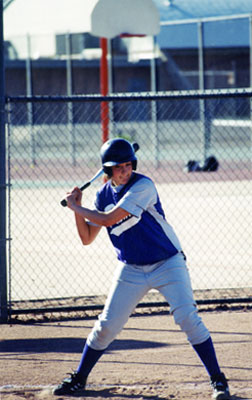 The author's comments:
This may sound of low importance, but 'tis true. There are negative words spoken about left-handed people that affect them. I have such an easy time using my left hand that I sometimes look at all the right-handed people out there and wonder how they're able to use their right hand with such ease.
Post a comment
Submit your own

Favorite Quote:
Since We are all different, We are truly all the same!

View profile
it doesn't count its not intentiol its convient there are fewer lefties than righteis also christians and all branches of that religion dislike lefties it was considered a devil sighn and some idiots still belive it.
taboomonster123 BRONZE said...
on Feb. 11 2011 at 7:50 am
taboomonster123 BRONZE, Herndon, Virginia
2 articles 0 photos 5 comments

Favorite Quote:
Never do anything you don't want to have to explain to the paramedics.

View profile
I'm sorry you have people in your life who are so biased they can't see you for who you are, rather than how you function. I really like this piece!
oddballinthegroup GOLD said...
on Oct. 20 2010 at 2:14 pm
oddballinthegroup GOLD, Wausau, Wisconsin
18 articles 1 photo 26 comments

Favorite Quote:
"When the world feels like its going to end, just remember, that its already tomorrow in Australia"

I was left handed in kindergarden, but I always felt weird holding the pencil in my left hand while everyone else didn't... i learned to be righthanded, but I wish I never did. I write like a leftie would with my right, and exhibit characteristics of a leftie. everyone I admire is left handed.

Be happy you are unique to this world. because lefthanded people ARE AWESOME!!

please keep on writing, you're very good at it

Don´t give up the fight.

I thought it was amazing! I did not know you were so much of a writer. WRITE. MORE!

View profile
Thank you so much guys, I honestly didn't expect to get such positive comments and reviews. I'm glad people have taken an interest in this topic because it really was tearing a whole in my heart without me even realizing it and writing this was my way of venting. Thank you so much guys.
-LeftBehindBroken- GOLD said...
on Aug. 21 2010 at 10:21 pm
-LeftBehindBroken- GOLD, Providence, South Carolina
16 articles 0 photos 73 comments

View profile
I DONT KNOW WHY MY COMPUTRR WONT COME OFF OF CAPS.. BUT I REALLY ENJOYED YOUR ARTICLE. SO MUCH IN FACT THAT I WAS LOOKING FOR MORE BY YOU. YOU NEED TO POST MORE BECAUSE YOU HABVE A LOT OF TALENT. AMD I BELIEVE IF YOU WAMT IT, YOU CAM MAKE IR TO THR TOPI looked
Lalalovable SILVER said...
on Aug. 20 2010 at 6:14 pm
Lalalovable SILVER, Antioch, California
7 articles 1 photo 50 comments
View profile
Wow! I'm sorry you had to go through this.i'm left handed and i've never been discrimanated against.  good job on writing this article.
thebushhippie PLATINUM said...
on Aug. 18 2010 at 5:44 pm
thebushhippie PLATINUM, Sandown, New Hampshire
24 articles 0 photos 49 comments

Favorite Quote:
Leave behind your own footprints! :0)

View profile
Wow, I never really thought about that before. I'm a rightie, and sometimes I'll try to do something with my left hand and it'll end up being horrible. Does that happen when you use your right hand? Now that you mention it, I can think of a ton of things made to be used with a right hand. That should change!!! This article was really well- written. Great job and thanks for writing!
Thesilentraven PLATINUM said...
on Aug. 18 2010 at 4:54 pm
Thesilentraven PLATINUM, Mableton, Georgia
40 articles 2 photos 1632 comments

View profile
I find it surprising that left-handed people are still the target of such discrimination. I'm so sorry that this happened to you. I found it to be a metaphor for all things that people can't help but are discriminated for. Thanks for writing this.