Where Did We Go Wrong? | Teen Ink

Where Did We Go Wrong?

There are over seven billion people on planet Earth. What's incredible is no two human beings are exactly alike. In the context of my prompt, no two parents are exactly alike. These differences are exemplified when there are two parents working towards the same goal. To accurately classify the many styles of parenting into basic groups, I set them on a scale between two extremes, the over-obsessed and the I-don't-care parents. I have then described the middle ground betwixt both classes. I would like to make it clear to the reader that it would be unfair and discriminatory to all parents to set them exactly in one of the three groups described. One must see them as on a scale in between, leaning towards a certain style. Only then can parenting styles be properly classified, despite their diversity.

1. The Over-obsessed Parents. These are the ones who know, or think they know, or want to know, every single thing their child is doing. When the child asks to go out they must know where, when, who with, what time they will be home, the weather, the activity, the food, and who the neighbors are. These are the super clean parents, whose floor you may eat off of, and anything edible and not currently being consumed is frozen solid. The child may not leave the house until their bed is made, and anything found on the floor will be confiscated and held for a monetary fine. Such parents tend to produce two basic types of children, those who grow up to be successful and extremely dull, and those who go nuts and rebel, leaving the poor couple to wonder why on earth Tom pierced his nose and ran away with a Christian rock band, when they brought him up so perfectly in line. The truth is, a kid can always find a way out when they are about to crack under pressure. They program their minds to see their parents as a mere annoyance that must be completely ignored for proper sanity. There are good sides to this type of parenting, first being that everything is clean, and the house runs in an efficient manner. The kids are likely to pick up some of these habits, and the majority do stay in school with high performance academically.

2. The I-Don't-Care Parents. The exact opposite of the over-obsessed parent, these parents usually don't even know where their child is. The kids enjoy a general sense of freedom, and they have the opportunity to experiment as much as they like. But with no proper guidelines they have a high chance of destroying themselves in the process. The neglect and instability of such a household tends to either put a lot of stress on a teen to fix what their parents don't, or the relaxed atmosphere gives them no desire or motivation to excel and succeed. The homes of these parents are often cluttered and unkempt. This can happen at lesser levels, where children are taken care of, but the parents don't talk, ask, or guide them when it comes to their personal problems. They don't seem to realize that their “little girl” is making out in the back of a truck every night. The children of these parents either learn quickly how to take control of their own lives, or they become as unfulfilled as their parents, and get into trouble. Academic performance is often lowered, and children can not reach their full potential.

3. The Happy Medium. A mixture of the first two, these parents are concerned, but allow their children some level of freedom. They listen and take interest in their kids, but do not control every minute of their lives. Everything is provided for, but they expect responsibility. This parenting style includes a lot of moral pressure on a child, because it means a lot more when you parents expect you to act a certain way rather than tell you too. There is often a unique friendship between parents and children in such a relationship, and a kid doesn't want to let his parents down. One example of such parenting I have learned from my own father. Once a month he sits down and interviews me about how my life is going. He lets me spill out anything that has been on my mind, makes helpful suggestions, and challenges me to do better in different areas. At the end of our talks I have new resolve and comfort, as well as a strengthened relationship with my dad. I never want to do anything to disappoint him. In such homes it may be cluttered or neat, yet there is always a welcoming and comfortable atmosphere. The offspring of such parenting are often successful and socially stimulating individuals.

To much of anything isn't necessarily good, and the word “extreme” often has a negative connotation for a reason. Through the tone of this essay I may have conveyed a preference or bias towards the middle ground, and that was not unintentional. Balance is a concept inherent to life, and without it things go wrong. While it may be impossible for the majority of parents to not lean one way or another, and they cannot be condemned for doing so, it is safe to say that actually landing in each extreme is dangerous ground. Parenting is one of the hardest jobs in the world, but it is time the world realized that by taking too much control, or too little, it makes the job even harder for both parents and their kids. 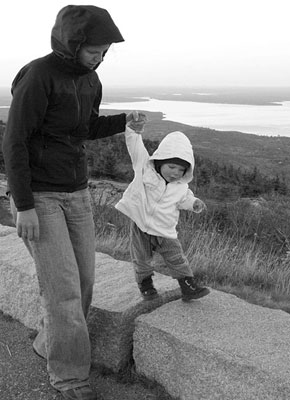 The author's comments:
Prompt: Classify parenting styles. If you wish, your purpose can be to persuade your reader that a particular style is the best.
Post a comment
Submit your own

Favorite Quote:
I'm probably in the sky, flying with the fishes,
Or maybe in the ocean, swimming with the pigeons,
See my world is different.
-Lil Wayne