Favorite Quote:
"All the worlds a stage. Men and women merely actors" (Shakespeare).

When humans evolved, we brought something with us. It is identified as music now, but back in the days of the homosapiens’ it was only a heartbeat. Evolutions don’t only happen to living organisms, but to anything that can be improved, which is everything. So, as humans evolved, so did our music. When humans created basic weapons they also created simple drums. Then it came to our use of stone in architecture with the creation of a strumming instrument. Even without partnering improvements, music has continued to evolve. However, in the last century music was a train for ideas, with religious beliefs and political attention grabbers. Music was used as an effective outlet to rally people for or against a movement, for this reason it was continued until the 2000s. Then, something changed; the music train apparently broke down. No longer were ideas sent through rhythms and pitches, now it is a sappy serenade. For this reason, contemporary music has grown depthless.

People no longer need to be a prodigy to create a symphony; anyone can accomplish this just by having basic computer skills. Now, this was not always the case, years ago you’d have to track down a Mozart, just so you could hear decent music. So, who needs to have any relationship with music, since an idiot can make a best seller when he’s bored? But on the other hand, technology has improved the sound quality, transportability, and quantity of music. Individuals can style their music to their taste, have it handy, and will always be able to have a wide variety for every occasion. Technology caused negatives and positives: even though the positives might just outweigh the negatives. Positive, handier music played with clearer tones. Negative, having lost the connection with the physical creation process and performance of music to the audiences from technological advances (history-timelines.org.uk). Technology has improved many people’s lives, but has helped increase the amount of lacking profundity in music.

Jim Callan, author of America in the 1960s, believed that “It was through music more than any other medium that young people expressed their feelings about life in the 1960s” (68). Which is true, many artists did, one of them being Pete Seeger. Pete began his music career in the 1940s on the radio, however it wasn’t until the 60s where he began his protest music. Protest music is songs on the topics of political ideas, like the civil rights and economy. Moreover, he wrote a song just for the Hudson River Clean-up, titled “The Lonesome Valley.” This protest song was successful, since it rallied people together to clean the Hudson. He continued to sing and write his protest music until 1975, and he is to this day still traveling with his wife to spread his views in his music (Callan). Pete Seeger is the perfect example artist for how music cannot only be for entertainment, but also for a selfless act invitation.

“Musical characteristics determining the adjective choices included major verses minor mode, firm verses flowing rhythm, and complex dissonant verses simple and consonant harmonies,” Carol L. Krumhans, Cornell University Psychology Department. She investigated the link between cognition and emotion relating to music, and found that music has no real role on our true emotions, but stimulates feelings similar to our real ones. The replications of emotions are what create the connection with the real ones, which is why people feel a strong connection with their emotions and the songs they listen to. Carol also discovered that cognition is a huge part in replicating emotions in the audiences, like she said, “major verses,” and “flowing rhythm.” To create these masterpieces takes a lot of time and precision, which doesn’t come from your emotional core, but from your logical mental process (jstor.com). So, an argument can be made that music is just fluent acting; since the artist doesn’t have to feel the same as the idea they’re trying to sing. Which has become very evident in the modern music, that the artists have become complacent with their songs. Performers and writers need no real emotional link with their music, since they have now perfected the skill of fooling us. An emotionless piece is the result of depthless contemporary music.

“It’s for the modern business edict. One school of change management argues that old practices must be ‘obliterated’ and new processes designed from scratch to fully leverage new technologies and business realities,” says Erik Brynjolfsson an MIT Sloan School of Management student’s paper. The business world has changed, and for some crazy reason it has influenced the music world (Brynjolfsson). It’s no longer about a word or an idea, but about the money. Show me the money! How about show me the idea? Artist aren’t working to create something beautiful, but to become rich. They want money so badly that they even created a song about it, “Billionaire” by Bruno Mars, they clearly admitted this in the song, and it became a top charted song. A song of how people want money actually made a lot of money for Bruno Mars. An assertion can be made, that this happened because of the beginning of the depression. People lost their jobs, families were moved out on the streets, the economy is down, what else could possibly go wrong? Which is probably why so many people connected with such a selfish topic, people didn’t want to loose their lively hood. The protection of ones security was a huge influence in pushing the limited topic area ahead.

Music started out simple, with a simple beat to follow from inside. It’s grown as much as us, but we don’t fluctuate as much as the music. People have never been afraid to say what they believe, its what started revolutions, but when it comes to connecting words we appear to be stammering. A recent occurrence, it could be from the technology advancement or even the business edict. Or it could be a connection between all the changes, times, responsibilities, technology, business edict, economy, and family life. We may never have a clear-cut answer for why music rapidly changed, but it is clearly evident that music has changed, and that it turned from music full of depth to empty pits. 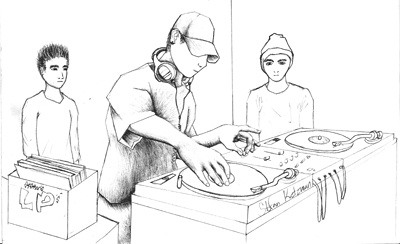