The Foothold of Ukrainian Corruption: The University | Teen Ink

The Foothold of Ukrainian Corruption: The University

Throughout Ukrainian colleges and universities, problems in both the admissions processes and within the classroom continually torment students. Amid the strenuous and time-consuming process of applying for a place in a school of higher education, corruption abounds. Two options exist for a student funding the courses they want to take: they can either pick the contract system or the budget method (Round, Rodgers). The contract system tracks the expense of the degree from start to finish and offers the student a set price for his/her tuition (Round, Rodgers). However, colleges still expect the students to take and pass the entrance exam for their desired college or university (Round, Rodgers). Statistics show that around two-thirds of the students who complete the entrance exam struggle with it, not because of the content on the test, but because, to get a high score, they are expected to bribe the grader (Round, Rodgers). Bribes, shameful but commonplace, haunt universities at all levels of education, even the pre-college application process.

The other method used for obtaining a college course is the much less-popular state-funded budget method. In this method, “each institution [has] a budget through which they can offer a number of free places and pay a stipend to the student” (Round, Rodgers). Unfortunately, the university asks for “extra tuition” when students wish to apply for a budget plan at their chosen university. This extra tuition equates to a bribe paid to ensure a favorable grade on the entrance exam. The entrance process into desired universities also reveals bias for the rich students due to their parents’ connections and power in the post-Soviet society (Round, Rodgers). Of course this method remains unpopular, for since most of the population recieves extraordinarily low wages, any money that can be saved translates to a few extra dollars in a family’s pocket.

Once applicants pass the entrance exam, students must survive in the university despite the overwhelming presence of bribery. Because of the structure of Ukrainian schools of higher education, students have to tackle many courses, which, in some cases, do not apply to their intended major; professors sense the students’ boredom and sometimes offer to shorten the duration of the class in exchange for a small payment (Round, Rodgers). After a professor makes this offer, students become nervous, for if they do not comply with the request, the instructor will disenroll them for failing grades. The corruption affects the student’s life as well. Within some of the courses, the students split up into multiple small groups where the students choose one classmate to become the group leader, or starosta (Round, Rodgers). This starosta then builds a relationship with the lecturer and finds out what pleases him in order to have a better chance at passing the course (Round, Rodgers). If a student chooses to participate in a sport, sometimes their coach speaks to the instructor and explains that the mentioned undergraduate needs to “[defend] the honor of the university,” and therefore cannot test that day (Round, Rodgers). For students who struggle in a particular class and wish to raise their grades, the university will sometimes offer a chance to undertake manual work around the campus, take private lessons for that class with their instructor, or even finish the classwork of richer, lazier students (Round, Rodgers). Overall, corruption has a monstrous foothold in the collegiate life and must end for the well-being of Ukraine’s future generations.

Taking necessary legal measures on faculty asking for bribe money can severely diminish corrupt practices in schools of higher education. As emphasized by the Minister of Education, “Increasing vigilance of and awareness among the law enforcement agencies, rectors, and the public… resulted in around 400 cases of bribery being disclosed, investigated, and prosecuted” (Osipian, “Ukrainian Corruption and Reform”). He further states that people need to work with rectors and faculty, meet with student leaders, conduct surveys anonymously, and undertake numerous control measures and investigations to collect evidence about who should be questioned about offering bribes (Osipian, “Ukrainian Corruption and Reform”). However, some suggest that parents also share some fault for the abundance of corruption by demanding higher grades and admissions in the university (Osipian, “Ukrainian Corruption and Reform”). The professors listen to their voice as parents and therefore ask for bribe money to raise the student’s grade or gain his acceptance into a chosen class. Regardless of the circumstances, one thing stands certain: corruption needs to end, and the first steps toward the abolishment of wicked practices start with taking advised legal precautions.

Ending corruption starts with taking appropriate legal measures. Because of the increased awareness of bribery among the general public, the risk for disclosure of the crime stands significantly greater, which will eventually lead to the end of the scandals. For example, on January 30, 2017, Ukrainian police arrested an associate professor of law at Zaporizhzhya National University, who received charges for forcing his students to pay bribes for  good grades in that class (Osipian, “Bribes in Criminal Code”). This professor faces charges under paragraph 3, Article 368 of the Criminal Code of Ukraine, “receiving illicit benefits based on extortion and committed repeatedly,” which includes consequences such as years in prison and loss of property (Osipian, “Bribes in Criminal Code”). If the law enforcement deals justly and harshly with incidents such as this, a message of intolerance will hopefully resonate within the collegiate community and lead to the eventual abolishment of bribery corruption. As a whole, this solution has a great success rates thus far, hopefully ending corruption in the Ukrainian education sector and making this nation one step closer to security.

To have an effectful resurgence in education, Ukrainian universities should eradicate the slew of corruption in both the admissions process and teaching through taking many anti-corruption steps by legal means. Intellectuals cannot ignore the facts: corruption overwhelms universities and has to stop. Hope lies in the legal steps taken by Ukraine to put an end to evil practices. With this hope follows a great future for Ukraine, for if one area of the society falls from corruption’s grasp, more will follow. 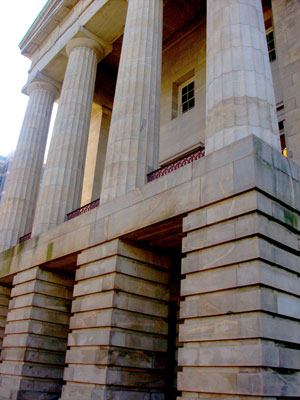