Who is the Real American? | Teen Ink

Who is the Real American?

Do you think just because Martin Luther King Jr. was an African American and George Washington a Caucasian and where fighting for equality and freedom for just for those races? Well let me tell you something both of them did not see color, were immigrants at one time or another and wanted equality. You may have been here since the mayflower but the mayflower was form England not America. The Native Americans who have suffered since the invasions are the only ones who have the right to say they are “real” Americans. The rest of us are immigrants whether we like it or not.
So before you insult someone and say they are not American think before you start saying something very brainless and just unintelligent. America is a Melting Pot, a country of Liberty, Freedom and Equality and if you do not believe in this then in my opinion you are worse than those who are against us for you are a hypocrite. FOR YOU HAVE NO RIGHT TO SAYOU WHO BELONGS HERE! IT IS LIKE SAYING YOU AND ME ARE NOT HUMAN BEINGS! WHICHEVER RELIGION YOU ARE OR CULTURE YOU HAVE I KNOW YOU NOW THAT THIS IS WRONG.
Do not say that you will help these people and that you are caring for you are human and so am I the only thing I am asking for is that you try to accept not judge. ? What would you do if someone was hungry yet the cashier would not serve them? How would you feel if your parents were told to go back where they came from? Would you call them a scum and moron as if you are better than them? So please, from me to you be the person I know America would be proud of. For the people who have to deal with this issue, yet we can stop it one at a time. Even though we are just teenagers does not mean we do not have a voice so help are country live up to its expectations around the world to build a better nation for our people. It does not matter you are Caucasian, asian, African, Hispanic or mixed I care about you and my country so get ready to take a stand because wheather you agree or not I am ready for a change.
My question is what would you do? 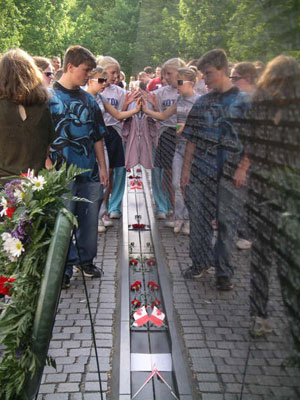 The author's comments:
I am mixed, was born in the U.S have a 4.0 average and 15 years old girl who is just ready for a change in heart. :(I can do it alone but help would be nice. So which side are you on? I have seen the pain and hurt we have caused so please help me heal this nation. I would prefer not to do it alone :)
Post a comment
Submit your own

thank you so much

View profile
I think you have an excellent point. Descriminating against foreigners when 'real americans' are foreigners also is like saying, 'we got here first.' I, also seeing the passion in your writing, was very moved by the piece.
Dr@maGeek SILVER said...
on Aug. 16 2010 at 10:53 pm
Dr@maGeek SILVER, Mckinny, Texas
7 articles 0 photos 16 comments
View profile
I love this point and I love how passionate you are in the writting!