Many people go to the zoo every year, but do not realize how inhumane they are. People go to the zoo to see animals, but don’t really think about how they got there and their living situations. Animals in the zoo are put in a cage to stay, while if they were in the wild they could roam freely. Zoos are brutal to animals.

Animals at the zoo are in cages all day. How would you feel if you had to stay in your house every day, without having the choice to leave? People may argue that animals at the zoo eat, have a space to sleep, a cage that looks like the habitat of the animal; however, people have food, a bed, and the needed habitat of a human. People still have to leave there house to get fresh air, and lots of people exercise in a gym which will require for you to leave the house. Humans need exercise and so do animals.

According to the Captive Animals’ Protection Society, they have filmed gorillas at the zoo eating their own vomit. Imagine you being forced to eat you vomit contaminated food if you wanted to survive. A gorilla biologist said that they never met anyone that has seen a wild gorilla vomit. They also said that zebras in the zoo are obese, because the grass they eat are higher in calories than regular grass. This proves that the diet of the animals kept in a zoo unnatural.

Another study of zoos worldwide that has been done states that lions and other big cats have 18,000 times less space in a zoo than in the wild. In addition, for polar bears in a zoo their space is one million times less than in the wild. At the zoo, animals may be locked up to fifteen hours a day for the night in even smaller quarters. Since birds get very little flight in a zoo, they are inclined to arthritis and osteoporosis. Birds that are free and in their natural habitat do not usually have these problems. If any animal in the zoo could escape, they will most likely leave happily. In the wild they get more space, freedom, and fewer diseases. Would you be willing to move to another house, if it provided a larger room, and you would get sick less often?

Zoos are making animals suffer to bring money to people. Animals can’t just be lazy and do nothing. If they do this, they will be punished because people aren’t attracted to that. Animals should not be treated like this; in the wild they don’t have to be slaves for zoos. Zoos cause many diseases and unnatural behaviors.

Animals are being taken away from their families to be put in a zoo. Imagine your child, sibling or parent being snatched away from your fingertips, and you will never be able to see them again. Animals get parts of their families taken away unwillingly, and they don’t have the ability to speak against it. Studies have shown that 41% of individual animals in a zoo can’t identify their species, which is the most basic information. Zoos are cruel and inhumane to animals. 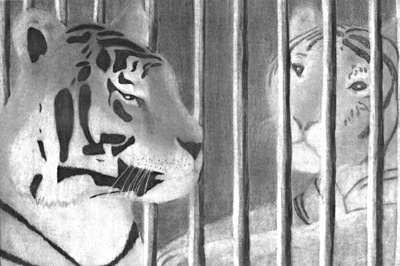