A small journey through the eyes of my camera | Teen Ink

A small journey through the eyes of my camera

Favorite Quote:
Always have a book at hand, in the parlor, on the table, for the family; a book of condensed thought and striking anecdote, of sound maxims and truthful apothegms. It will impress on your own mind a thousand valuable suggestions, and teach your children a thousand lessons of truth and duty. Such a book is a casket of jewels for your housebold. - Tryon Edwards

Photography. Someone asks me about it and I start narrating this long story. So, I thought why not share it with my friends? After all it is what I love…probably love the most. Okay, so starting right from the beginning let me ask you a small question. Do any of you remember those non-digital still cameras? My dad had one known as “Pentax”; actually I think it’s still there in the store room. He said that “A picture speaks a thousand words”. I found it rather astonishing and I tried using it once, when I missed the presence of a DSLR in my home, but the pictures came blurred.”Waste of money!” Baba said smirking and “THUD!” he banged the door on my face. This was his expression after the studio people called him up and informed him about the debt caused by me. The fact kept on rolling in my mind until when again the door creaked open and out he came with a bundle of fresh notes in his hands. He took my palm and handed me over the sheaf of notes in a manner as sweet and calm like that of the treatment meted out to America by the Taliban people back in 1983. He gave me a grin and shouted loudly enough to gather all my family members and house staff around me “This girl, is surely going to make me proud, even the studio people have started thinking high of her now and why won’t they?..After all she is the one who made me pay seven hundred bucks for those beautifully clicked blurred images! ”. Like most of the Bengali’s he blamed Ma for this too and as a revenge she pulled my right ear and twisted it hard, then harder and finally the hardest and would have continued until Thamma (meaning grandma in Bengali) came in front and spared me. I spoke to her in a soft inaudible voice stating “Love you, Thamma” regretting those silly moments when I had mischievously dipped my half-eaten biscuit into her cup of chai.

I was in class VI that time, most probably eleven years of age and what I did to express my anger for not giving me a camera, would make one go nauseous, and would make one wonder about me- whether I am a human being or an alien. So why not just ignore it? After a month or two we went to Bangalore to visit my elder brother. You can call him dada, as I do. He surprised us with a brand new Canon DSLR 400D. While dada was giving a demo of its vibrant features, I was busy noticing Baba’s expressions- a half happy-half sad one and Ma’s? Ma, as usual in a typical Bengali style said in a rather rebuking way” Oh God, why did you buy such a costly one? There were good ones available at a lower price, nay?” Somehow, dada had managed to console her out of the situation. There happens to be a gap of thirteen years between us, but I think that is what made us closer. As a good brother, he had let me use his camera, while my parents glanced him angry looks. One instance of our bond: He came back from school one afternoon; I was about three years or so. I was performing my regular sessions of ant-torture when suddenly after seeing him I picked up an unlucky one and went up to greet him. I smiled a cute wide one and asked him whether he would like some tasty purgative. He instantly nodded a yes and opened his mouth and I had let it creep into the wide cavity. I hid behind Ma and went full of tiny giggles and started puffing my mouth when he gave me a light slap with eyes brimming with tears. We all had ended up laughing that day. However, within a few days I had managed to learn how to capture in a master manner and to take random clicks (under careful glances of course). When dada came back from Delhi after completing his MBA, he said “Okay, I can share it with you” I did not say a word, but gave him a glorious smile, one to express all my gratitude towards him. He left it with me. Then onwards it’s my all-time companion. I love taking abstract photos- ones in which you would find objects expressing words and feelings. By now I may have taken about ten thousands of those but a great master-photographer has said “Your first 10,000 photographs are your worst” So, I need to click more of those. It can be a passion or rather a hobby for many of you too just like it is mine. It’s something which will help you to see the world, to see it …to view with the eye of the camera. It provides one with rest, freedom from boredom and vice. It makes you forget all the snobs and sniffles of life and makes you happy. It makes you feel great like the leader of a new world where you can store people, nature, objects, power of light like how you do in your memory, where you will be manipulated by the magical world of imagination. In one word it is awesome, so friends give it a try! I started it somewhat a few years ago, and I am still getting better in it. I may make mistakes but I will never leave it because it is something what I love and it loves me back too! (This rarely happens in reality). It makes an excellent past-time provided we don’t mingle with it during our study hours.

By now, I have won three awards in an international site- one for clicking a well done image, one for being a remarkable young photographer and one for capturing one of the top 30 best photos. I hope you all the best as I know you are aiming to go for it soon! 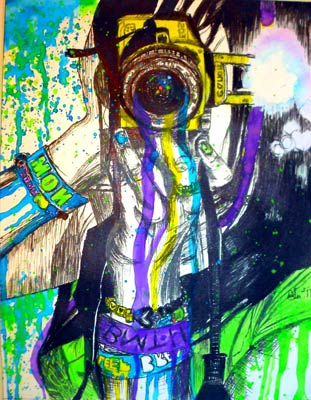 The author's comments:
Most of the people seen by me are keen to buy costly cameras, thinking owning one makes one a great photographer. Photography is not about money, it is not show-off. It is something which if you love, it will love you back.
Post a comment
Submit your own