The Struggle We Face (As Writers) | Teen Ink

The Struggle We Face (As Writers)

I've loved writing ever since I was young. Reading everything from road signs to restaurant menus. All of it was just so fascinating! But now that I've entered the world of competitive writing- the kind where people want to get published- it's much harder to fall in love with my stories like I did when I was eight and wrote about potatoes.

Nowadays I have to watch for typos and usage of weak verbs. It just isn't as easy as it used to be. I try my best to put meaning into what I put down on paper or type up on my computer, no blood sweat or tears involved. It's effortless to become frustrated once you realize the simple fact that it isn't a simple process.

When I got to that point, I consulted my extremely witty and helpful Language Arts teacher. At the beginning of the school year, he proposed a "dare" to the middle school I could not resist. He said that if one of his students were to get published, he would buy them their first inkwell pen (his signature utensil.) Ever since, I go to him for advice on his seemingly impossible task.

I wrote in my writers journal about being afraid of getting published and about my discouragement. I got it back a few days later after receiving my grade, and there was a comment on that entry that read:

Think about that, and fall in love with your writing again. 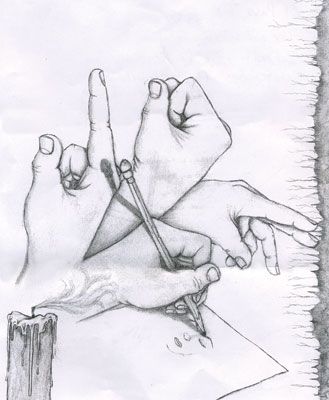 True story. I loved writing this peice, and I hope you all enjoy reading it.

This is also a bit of a tip for anyone who is frustrated with their writing. As long as you love it, others will too.

Favorite Quote:
"Success is not final. Failure is not fatal. It is courage to continue that counts." - Winston Churchill

Favorite Quote:
Smile even through your tears
:)
*
*

View profile
How true! Your teacher sounds wonderful. His quote is a valuable lesson all of us writers can benefit from.